Anja Kampmann was born in Hamburg and resides in Leipzig. She wrote for radio before writing a dissertation on musicality and silence in the late works of Samuel Beckett. She is the author of a collection of poems in German. High as the Waters Rise is her first novel, for which she received the Mara Cassens Prize for best German debut novel, and the Lessing Promotion Prize. She was also awarded the Bergen–Enkheim prize and was nominated for the Leipzig Book Fair Prize and the German Book Prize.

Anne Posten translates prose, poetry, and drama from German. The recipient of a Fulbright Fellowship, her translations of authors such as Peter Bichsel, Carl Seelig, Thomas Brasch, Tankred Dorst, Anna Katharina Hahn, and Paul Scheerbart have appeared with New Directions, Christine Burgin/The University of Chicago, Music and Literature, n+1, VICE, The Buenos Aires Review, FIELD, Stonecutter, and Hanging Loose, among others. She is based in New York and Berlin. 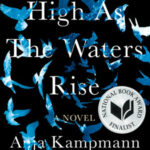 High As the Waters Rise

This "gorgeously written" National Book Award finalist is a dazzling, heart-rending story of an oil rig worker whose closest friend goes missing, plunging him into isolation and forcing him to confront his past (NPR, One of the Best Books of the Year).

One night aboard an oil drilling platform in the Atlantic, Waclaw returns to his cabin to find that his bunkmate and companion, Mátyás, has gone missing. A search of the rig confirms his fear that Mátyás has fallen into the sea.

Grief-stricken, he embarks on an epic emotional and physical journey that takes him to Morocco, to Budapest and Mátyás's hometown in Hungary, to Malta, Italy, and finally to the mining town of his childhood in Germany. Waclaw's encounters along the way with other lost and yearning souls—Mátyás's angry, grieving half-sister; lonely rig workers on shore leave; a truck driver who watches the world change from his driver's seat—bring us closer to his origins while also revealing the problems of a globalized economy dependent on waning natural resources.

High as the Waters Rise is a stirring exploration of male intimacy, the nature of memory and grief, and the cost of freedom—the story of a man who stands at the margins of a society from which he has profited little, though its functioning depends on his labor.