Originally from Rochester, Bill Peters has received fellowships from the Massachusetts Cultural Council and the University of Massachusetts, Amherst for his fiction. As an editor and journalist, he co–produced four arts and entertainment publications for the Springfield Republican daily newspaper and is now an editor for The New York Times News Service. He lives in Gainesville, Florida. This is his first book. 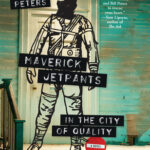 Maverick Jetpants in the City of Quality

In 1999 Rochester, a mysterious spate of arsons threatens a hilarious and heart–breaking friendship based on a language of inside jokes in "one of the most inventive novels published this year" (The Los Angeles Review).

Rochester, New York, 1999: An arsonist is loose on the streets of a city in decline. Gone are the days of Rioting in the Vomit Cruiser, searching for a possible Tokyo Rocking Horse. In this hilarious, wildly original debut novel, Nathan Gray and best friend Necro live by the code of Joke Royalty, a system of in–jokes known only to a select few. But as the reality of full–time employment, possible spouses, and Neo–Nazis encroaches, their friendship unravels, threatening their dreams of becoming Kodak Park Winjas.

Among the gravest Hellstacheries: Necro’s strangely vicious drawings and his sudden interest in a group of weapons enthusiasts who may or may not be responsible for the fires erupting through downtown. With no Holy Grail Points left to his name, Nate ventures into Rochester’s strangest corners to find out if his best friend is a domestic terrorist Pinning Bow Ties on the Dead or simply Maverick Jetpantsing on with his life—perhaps even beyond The City of Quality.