Danielle Dutton’s fiction has appeared in magazines such as Harper’s, BOMB, Fence, and Noon. She is the author of a collection of hybrid prose pieces, Attempts at a Life, which Daniel Handler in Entertainment Weekly called "indescribably beautiful," and an experimental novel, S P R A W L, a finalist for the Believer Book Award. In 2015, she wrote the texts for Here Comes Kitty: A Comic Opera, an artists’ book with collages by Richard Kraft.

In 2010, Dutton founded the small press Dorothy, a publishing project, named for her great aunt Dorothy Traver, a librarian who drove a bookmobile through the back hills of southern California. Now in its fifth year, the press’s books are widely reviewed. The press itself has been praised in the New York Times and Chicago Tribune, and Dutton has been interviewed in the Paris Review, Kirkus, and elsewhere for her work promoting innovative women writers. 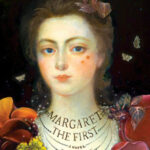 “The duchess herself would be delighted at her resurrection in Margaret the First...Dutton expertly captures the pathos of a woman whose happiness is furrowed with the anxiety of underacknowledgment.” —Katharine Grant, The New York Times Book Review

Margaret the First dramatizes the life of Margaret Cavendish, the shy, gifted, and wildly unconventional 17th–century Duchess. The eccentric Margaret wrote and published volumes of poems, philosophy, feminist plays, and utopian science fiction at a time when "being a writer" was not an option open to women. As one of the Queen's attendants and the daughter of prominent Royalists, she was exiled to France when King Charles I was overthrown. As the English Civil War raged on, Margaret met and married William Cavendish, who encouraged her writing and her desire for a career. After the War, her work earned her both fame and infamy in England: at the dawn of daily newspapers, she was "Mad Madge," an original tabloid celebrity. Yet Margaret was also the first woman to be invited to the Royal Society of London—a mainstay of the Scientific Revolution—and the last for another two hundred years.

Margaret the First is very much a contemporary novel set in the past. Written with lucid precision and sharp cuts through narrative time, it is a gorgeous and wholly new approach to imagining the life of a historical woman.

"In Margaret the First, there is plenty of room for play. Dutton’s work serves to emphasize the ambiguities of archival proof, restoring historical narratives to what they have perhapsalways already been: provoking and serious fantasies,convincing reconstructions, true fictions.”—Lucy Ives, The New Yorker

“Danielle Dutton engagingly embellishes the life of Margaret the First, the infamousDuchess of Newcastle–upon–Tyne.” —Vanity Fair