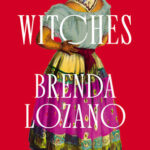 The beguiling story of a young journalist whose investigation of a murder leads her to the most legendary healer in all of Mexico, from one of the most prominent voices of a new generation of Latin American writers