JESS ARNDT received her MFA at the Milton Avery Graduate School of the Arts at Bard College, and was a 2013 Graywolf SLS Fellow and 2010 Fiction Fellow at the New York Foundation of the Arts. Her writing has appeared in Fence, Bomb, Aufgabe, Parkett, and Night Papers, and in her manifesto for the Knife’s Shaking the Habitual world tour. She is a co–founder of New Herring Press, dedicated to publishing prose and polemics. She lives and works in Los Angeles. 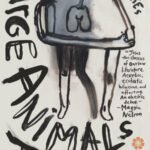 “Jess Arndt’s Large Animals is wildly original, even as it joins in with the classics of loaded, outlaw literature. Acerbic, ecstatic, hilarious, psychedelic, and affecting in turn, this is an electric debut.” —Maggie Nelson, National Book Critics Circle Award–winning author of The Argonauts

Jess Arndt's striking debut collection confronts what it means to have a body. Boldly straddling the line between the imagined and the real, the masculine and the feminine, the knowable and the impossible, these twelve stories are an exhilarating and profoundly original expression of voice. In “Jeff,” Lily Tomlin confuses Jess for Jeff, instigating a dark and hilarious identity crisis. In “Together,” a couple battles a mysterious STD that slowly undoes their relationship, while outside a ferocious weed colonizes their urban garden. And in “Contrails,” a character on the precipice of a seismic change goes on a tour of past lovers, confronting their own reluctance to move on.

Arndt’s subjects are canny observers even while they remain dangerously blind to their own truest impulses. Often unnamed, these narrators challenge the limits of language—collectively, their voices create a transgressive new formal space that makes room for the queer, the nonconforming, the undefined. And yet, while they crave connection, love, and understanding, they are constantly at risk of destroying themselves. Large Animals pitches toward the heart, pushing at all our most tender parts—our sex organs, our geography, our words, and the tendons and nerves of our culture.