Peter Cameron is the author of eight novels and three collections of stories. His short fiction has appeared in The New Yorker, The Paris Review, Rolling Stone, and many other literary journals. He lives in New York City and Sandgate, Vermont. 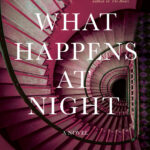 What Happens at Night

A couple find themselves at a fading, grand European hotel full of eccentric and sometimes unsettling patrons in this "faultlessly elegant and quietly menacing" allegorical story that examines the significance of shifting desires and the uncertainty of reality (Garth Greenwell, author of Cleanness).

An unnamed American couple travels to a strange, snowy European city to adopt a baby. It’s a difficult journey that leaves the wife, who is struggling with cancer, desperately weak, and her husband worries that her illness will prevent the orphanage from releasing their child.

On arrival, the couple checks into the cavernous and eerily deserted Borgarfjaroasysla Grand Imperial Hotel where the bar is always open and the lobby populated with an enigmatic cast of characters ranging from an ancient, flamboyant chanteuse to a debauched businessman to an enigmatic faith healer. Nothing is as it seems in this baffling, frozen world, and the more the couple struggles to claim their baby, the less they seem to know about their marriage, themselves, and life itself.

For readers of Ian McEwan, Elizabeth Strout, and Iris Murdoch, What Happens at Night is a "masterpiece" (Edmund White) poised on the cusp of reality, told by "an elegantly acute and mysteriously beguiling writer" (Richard Eder, The Boston Globe).