PETER ORNER is the author of the novels The Second Coming of Mavala Shikongo and Love and Shame and Love and the story collections Esther Stories, Last Car Over the Sagamore Bridge, and Maggie Brown & Others. His previous collection of essays, Am I Alone Here?: Notes on Living to Read and Reading to Live, was a finalist for the National Book Critics Circle Award for Criticism. A three-time recipient of the Pushcart Prize, Orner’s work has appeared in The Best American Short Stories, The New York Times, The New Yorker, The Atlantic, The Paris Review, Granta, McSweeney’s, and has been translated into eight ­languages. He has been awarded the Rome Prize from the American Academy of Arts and Letters, a Guggenheim Fellowship, a two-year Lannan Foundation Literary Fellowship, the California Book Award for fiction, the Edward Lewis Wallant Award for Jewish fiction, as well as a Fulbright in Namibia. He is the director of creative writing at Dartmouth College and lives with his family in Norwich, Vermont. 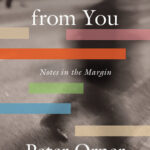 Still No Word from You

Notes in the Margin

A new collection of pieces on literature and life by the author of Am I Alone Here?, a finalist for the NBCC Award for Criticism

Stationed in the South Pacific during World War II, Seymour Orner wrote a letter every day to his wife, Lorraine. She seldom responded, leading him to plead in 1945, “Another day and still no word from you.” Seventy years later, Peter Orner writes in response to his grandfather’s plea: “Maybe we read because we seek that word from someone, from anyone.”

From the acclaimed fiction writer about whom Dwight Garner of The New York Times wrote, “You know from the second you pick him up that he’s the real deal,” comes Still No Word from You, a unique chain of essays and intimate stories that meld the lived life and the reading life. For Orner, there is no separation. Covering such well-known writers as Lorraine Hansberry, Primo Levi, and Marilynne Robinson, as well as other greats like Maeve Brennan and James Alan McPherson, Orner’s highly personal take on literature alternates with his own true stories of loss and love, hope and despair. In his mother’s copy of A Coney Island of the Mind, he’s stopped short by a single word in the margin, “YES!”—which leads him to conjure his mother at twenty-three. He stops reading Penelope Fitzgerald’s The Beginning of Spring three quarters of the way through because he knows that finishing the novel will leave him bereft. Orner’s solution is to start again from the beginning to slow the inevitable heartache.

Still No Word from You is a book for anyone for whom reading is as essential as breathing. 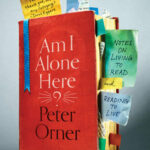 Am I Alone Here?

Notes on Living to Read and Reading to Live

This National Book Critics Circle Award is “an entrancing attempt to catch what falls between: the irreducibly personal, messy, even embarrassing ways reading and living bleed into each other, which neither literary criticism nor autobiography ever quite acknowledges" (The New York Times).

“Stories, both my own and those I’ve taken to heart, make up whoever it is that I’ve become,” Peter Orner writes in this collection of essays about reading, writing, and living. Orner reads and writes everywhere he finds himself: a hospital cafeteria, a coffee shop in Albania, or a crowded bus in Haiti. The result is a book of unlearned meditations that stumbles into memoir.

Among the many writers Orner addresses are Isaac Babel and Zora Neale Hurston, both of whom told their truths and were silenced; Franz Kafka, who professed loneliness but craved connection; Robert Walser, who spent the last twenty-three years of his life in a Swiss insane asylum, working at being crazy; and Juan Rulfo, who practiced the difficult art of silence. Virginia Woolf, Eudora Welty, Yasunari Kawabata, Saul Bellow, Mavis Gallant, John Edgar Wideman, William Trevor, and Václav Havel make appearances, as well as the poet Herbert Morris--about whom almost nothing is known.

An elegy for an eccentric late father, and the end of a marriage, Am I Alone Here? is also a celebration of the possibility of renewal. At once personal and panoramic, this book will inspire readers to return to the essential stories of their own lives.