Pyae Moe Thet War is a writer and digital media editor who was born and raised in Yangon, Myanmar. She received a BA from Bard College at Simon’s Rock, and MA's from University College London and the University of East Anglia before moving back to Yangon where she currently lives with her dogs. You’ve Changed is her debut book. 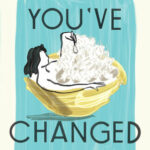 Fake Accents, Feminism, and Other Comedies from Myanmar

In this electric debut essay collection, a Myanmar millennial playfully challenges us to examine the knots and complications of immigration status, eating habits, Western feminism in an Asian home, and more, guiding us toward an expansive idea of what it means to be a Myanmar woman today

What does it mean to be a Myanmar person—a baker, swimmer, writer and woman—on your own terms rather than those of the colonizer? These irreverent yet vulnerable essays ask that question by tracing the journey of a woman who spent her young adulthood in the US and UK before returning to her hometown of Yangon, where she still lives.

In You’ve Changed, Pyae takes on romantic relationships whose futures are determined by different passports, switching accents in American taxis, the patriarchal Myanmar concept of hpone which governs how laundry is done, swimming as refuge from mental illness, pleasure and shame around eating rice, and baking in a kitchen far from white America’s imagination.

Throughout, she wrestles with the question of who she is—a Myanmar woman in the West, a Western-educated person in Yangon, a writer who refuses to be labeled a “race writer.” With intimate and funny prose, Pyae shows how the truth of identity may be found not in stability, but in its gloriously unsettled nature.