RUBY HAMAD is a journalist, author, and academic completing a Ph.D. in media studies at UNSW (Australia). Her Guardian article, ‘How White Women Use Strategic Tears to Silence Women of Color,’ became a global flashpoint for discussions of white feminism and racism and inspired her debut book, White Tears/Brown Scars, which has received critical acclaim in her home country of Australia. Her writing has also featured in Prospect Magazine, The New Arab, and more. She splits her time between Sydney and New York. 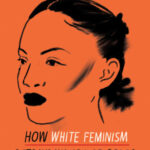 Called “powerful and provocative" by Dr. Ibram X. Kendi, author of the New York Times bestselling How to be an Antiracist, this explosive book of history and cultural criticism reveals how white feminism has been used as a weapon of white supremacy and patriarchy deployed against Black and Indigenous women, and women of color.

Discussing subjects as varied as The Hunger Games, Alexandria Ocasio–Cortez, the viral BBQ Becky video, and 19th century lynchings of Mexicans in the American Southwest, Ruby Hamad undertakes a new investigation of gender and race. She shows how the division between innocent white women and racialized, sexualized women of color was created, and why this division is crucial to confront.

"A stunning and thorough look at White womanhood that should be required reading for anyone who claims to be an intersectional feminist. Hamad’s controlled urgency makes the book an illuminating and poignant read. Hamad is a purveyor of such bold thinking, the only question is, are we ready to listen?" —Rosa Boshier, The Washington Post