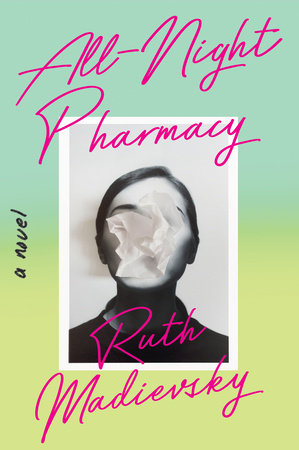 On the night of her high school graduation, a young woman follows her older sister Debbie to Salvation, a Los Angeles bar patronized by energy healers, aspiring actors, and all-around misfits. After the two share a bag of unidentified pills, the evening turns into a haze of sensual and risky interactions—nothing unusual for two sisters bound in an incredibly toxic relationship. Our unnamed narrator has always been under the spell of the alluring and rebellious Debbie and, despite her own hesitations, she has always said yes to nights like these. That is, until Debbie disappears.

Falling deeper into the life she cultivated with her sister, our narrator gets a job as an emergency room secretary where she steals pills to sell on the side. Cue Sasha, a Jewish refugee from the former Soviet Union who arrives at the hospital claiming to be a psychic tasked with acting as the narrator’s spiritual guide. The nature of this relationship evolves and blurs, a kaleidoscope of friendship, sex, mysticism, and ambiguous power dynamics.

With prose pulsing like a neon sign, Ruth Madievsky’s All-Night Pharmacy is an intoxicating portrait of a young woman consumed with unease over how a person should be. As she attempts sobriety and sexual embodiment, she must decide whether to search for her estranged sister, or allow her to remain a relic of the past.

Ruth Madievsky is the author of a bestselling poetry collection, Emergency Brake (Tavern Books, 2016). Her work appears in Harper’s Bazaar, Guernica, Literary Hub, Kenyon Review, Ploughshares, and elsewhere. She is a founding member of the Cheburashka Collective, a community of women and nonbinary writers from the former Soviet Union. Originally from Moldova, she lives in Los Angeles, where she works as an HIV and primary care pharmacist.

"All-Night Pharmacy is a genuinely propulsive and magnetic read. Madievsky's writing is rich and boldly dark, slick and queer in all the best ways. Immersing myself in her work felt akin to pressing on a bruise, a beautiful ache that I remembered long after I finished reading. A deeply human, wonderfully twisty novel that takes you down the rabbit hole of familial trauma and back up to the light again. All-Night Pharmacy is a glimmery showstopper of a debut novel. I'm obsessed with it." —Kristen Arnett, New York Times bestselling author of Mostly Dead Things

"All-Night Pharmacy is a blackhole, a force so lively, unfiltered, and pure that you won't mind being sucked in headfirst. On a line level, Madievsky is untouchable. Somehow, she has crafted a rough-edged pill of a debut that cuts deep while also being deeply pleasurable to swallow." —Jean Kyoung Frazier, author of Pizza Girl

“With poetic precision and clear-eyed wit, Ruth Madievsky takes a scalpel to familiar ideas of intimacy, sisterhood, and becoming, reshaping them with an understanding and magnetism all her own. Her debut is a meditation on sobriety, an excavation of belonging, and the realest portrait of inherited trauma I’ve ever seen. All-Night Pharmacy is pure sorcery, like being up til dawn with your wildest, wisest friend, ready to bond yourself to her for life.” —Kyle Lucia Wu, author of Win Me Something

"All-Night Pharmacy dances on the knife's edge of a sister's fierce love and the necessary loneliness of claiming your own destiny. Wry and tender, Ruth Madievsky's novel offers a sensitive portrayal of addiction and recovery, queer romance, and fraught family dynamics. A beautiful book and healing read, from beginning to end." —Jean Chen Ho, author of Fiona and Jane
Don't miss news & events from Catapult. Subscribe to the newsletter today.