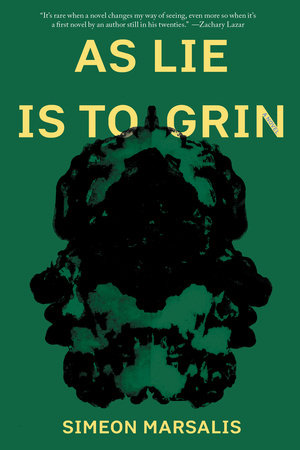 As Lie Is to Grin

Shortlisted for the 2017 Center for Fiction First Novel Prize

“A portrait of a young man’s unraveling, a depiction of how race shapes and deforms us, a coming–of–age story that is also a confrontation with American history and amnesia. The book achieves more in its brief span than most books do at three times the length.” —Zachary Lazar, author of I Pity the Poor Immigrant

David, the narrator of Simeon Marsalis’s singular first novel, is a freshman at the University of Vermont who is struggling to define himself against the white backdrop of his school. He is also mourning the loss of his New York girlfriend, whose grandfather’s alma mater he has chosen to attend. When David met Melody, he lied to her about who he was and where he lived, creating a more intriguing story than his own. This lie haunts and almost unhinges him as he attempts to find his true voice and identity.

On campus in Vermont, David imagines encounters with a student from the past who might represent either Melody’s grandfather or Jean Toomer, the author of the acclaimed Harlem Renaissance novel Cane (1923). He becomes obsessed with the varieties of American architecture “upon land that was stolen,” and with the university’s past and attitudes as recorded in its newspaper, The Cynic. And he is frustrated with the way the Internet and libraries are curated, making it difficult to find the information he needs to make connections between the university’s history, African American history, and his own life.

In New York, the previous year, Melody confides a shocking secret about her grandfather’s student days at the University of Vermont. When she and her father collude with the intent to meet David’s mother in Harlem—craving what they consider an authentic experience of the black world—their plan ends explosively. The title of this impressive and emotionally powerful novel is inspired by Paul Laurence Dunbar’s poem “We Wear the Mask” (1896): “We wear the mask that grins and lies . . .”

Simeon Marsalis was born in 1990 and graduated from the University of Vermont in 2013. He has lived in New York, New Hampshire, and New Orleans. As Lie Is to Grin is his first book.

"As Lie Is to Grin, Simeon Marsalis's debut novel, is imbued with a constant sense of searching. . . . Poetic in its own way and thought provoking to its core, this slim novel from a young author marks the start of a promising career." —Shelf Awareness for Readers (starred review)

"A sophisticated and complex work, this debut reconsiders the coming–of–age story for the twenty–first century." —Foreword Reviews

"This affecting and unaffected story is for all readers."" —Library Journal

"It's rare when a novel changes my way of seeing, even more so when it's a first novel by an author still in his twenties. Simeon Marsalis's As Lie Is to Grin is not a satire meant to teach us lessons, nor a statement of hope or despair, but something more visionary––a portrait of a young man's unraveling, a depiction of how race shapes and deforms us, a coming–of–age story that is also a confrontation with American history and amnesia. The book achieves more in its brief span than most books do at three times the length."" — Zachary Lazar, author of I Pity the Poor Immigrant

"As Lie Is to Grin courageously works through the fraught legacy of race and 'the color line,' often transgressed with deep psychological consequences. In this haunting tale of one young man's search for himself, Simeon Marsalis shuffles and refigures time so that our troubled history no longer hides in plain sight. This is superb writing that feels ceremonious in its wisdom and inexhaustible in its offerings."" —Major Jackson, author of Roll Deep

“In his debut novel, Simeon Marsalis crafts a trippy and transgressive tale that bends the recognizable world in startling ways to broaden our understanding of what it means to be young, gifted, and black in America today. Simeon, I salute you. Your time to shine.”—Jeffery Renard Allen, author of Song of the Shank and Rails Under My Back

“As Lie Is to Grin is an extraordinarily sophisticated first novel, with an innovative structure involving a perpetually surprising cascade of harmony and dissonance. It’s also an unusually subtle and sensitive take on our twenty–first–century racial crisis, particularly as it plays out on campus. Simeon Marsalis is a writer to watch for many more reasons than that, but I will say that every college student in America today needs to read this book, and probably most of the professors.” —Madison Smartt Bell, author of the Haitian Revolution trilogy, beginning with All Souls' Rising
Don't miss news & events from Catapult. Subscribe to the newsletter today.