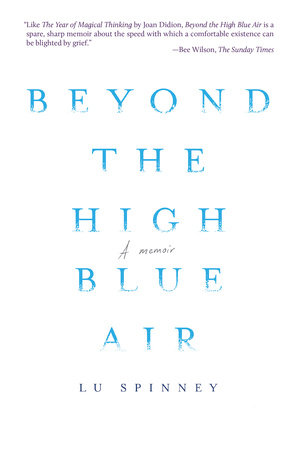 Beyond the High Blue Air

“Like The Year of Magical Thinking by Joan Didion, Beyond the High Blue Air is a spare, sharp memoir about the speed with which a comfortable existence can be blighted by grief.” —Bee Wilson, The Sunday Times

Lu Spinney’s memoir Beyond the High Blue Air is at once a portrait of the fearlessness of familial love and the profound dilemma posed by modern medicine. When Spinney’s twenty–nine–year–old son, Miles, flies up on his snowboard, “he knows he is not in control as he is taken by force up the ramp,” writes his mother, “skewing sideways as his board clips the edge and then he is hurtling, spinning up, up into the free blue sky ahead . . .” He lands hard on the ice and falls into a coma.

Thus begins the erratic loss—Miles first in a coma and then trapped in a fluctuating state of minimal consciousness—that unravels over the next five years. Spinney, her husband, and three other children put their lives on hold to tend to Miles at various hospitals and finally in a care home. They hold out hope that he will be returned to them. With blunt precision, Spinney chronicles her family’s intimate experience.

And yet, as personal a book as this is, it offers universal meaning, presenting an eloquent and piercing description of what it feels to witness an intimate become unfamiliar. This is a story about ambiguous loss: the disappearance of someone who is still there. Three quarters of the way through, however, Spinney’s story takes a turn. The family and, to the degree that he can communicate, Miles himself come to view ending his life as the only possible release from the prison of his body and mind. Spinney, cutting her last thread of hope, wishes for her son to die. And yet, even as she allows this difficult revelation to settle, she learns that this is not her decision to make. Because Miles is diagnosed as being in a “minimally conscious state” rather than a “persistent vegetative state,” there is no legal way to bring about his death, a bewildering paradox that Spinney navigates with compassion and wisdom. This profound book encompasses the lyrical revelations of a memoir like Jean–Dominique Bauby’s The Diving Bell and the Butterfly as well as the crucial medical and moral insights of a book such as Atul Gawande’s Being Mortal.

Lu Spinney was born in Cape Town and spent her childhood on a farm in the Midlands of KwaZulu–Natal, later moving with her family to the Indian Ocean coast north of Durban. After university, she left South Africa to live in Nice and Paris, before settling in London.

“Like The Year of Magical Thinking by Joan Didion, Beyond the High Blue Air is a spare, sharp memoir about the speed with which a comfortable existence can be blighted by grief.” —Bee Wilson, The Sunday Times

"Through her close observations and beautiful words, Spinney makes the reader understand vividly what life was like, for Miles and for her. Beyond the High Blue Air is wholly a mother’s story, written with passion, anger, grief and great love." —Laurie Hertzel, The Star Tribune

"A painful account made beautiful by Spinney’s poignant details and tender insight." —Booklist

“Lu Spinney has a tragic story to tell. The circumstances are unique. But what she expresses—disbelief, hope, anger, dismay—is universal. And the ethical questions she raises are vitally important. Most important, she writes beautifully.”—Blake Morrison, author of And When Did You Last See Your Father?

“This book is a work of the highest literary skill and heroic courage born out of what for most would be unendurable, and wholly silencing, maternal pain. To read it is to feel, sympathetically, both that pain and admiration for the woman who has written so eloquently through it.”—John Sutherland, author of The Boy Who Loved Books

“Spinney describes her son’s harrowing final years from a uniquely maternal perspective, weighing the appalling ambiguities of his situation with a sensitivity and respect for both the person he was and the person he has become.”—Wendy Moore, The Literary Review

“Impossible to read this eloquent, heart–breakingly well–written record of a mother’s loss without realizing that the people you love are all also standing on the precipice edge Lu Spinney describes so well.” —Francis Spufford, author of Golden Hill

"Beyond the High Blue Air explores the limits of medical science and searches for the unlimited potential of human compassion." —Forward Reviews (starred review)

“Lu Spinney’s beautifully written memoir is a powerful testament of personal grief and a ferocious critique of the way our society deals with suffering and death.”—Jane Shilling, Daily Mail (London)

“Spinney’s eye is unflinching and she spares us nothing.”—Cathy Rentzenbrink, The Times (London)

“A memoir written about a son's tragic accident and subsequent death is not destined to be an easy read. It's not easy because readers will be able to identify with the author's journey as her son is first in a coma, then in a fluid state of consciousness, until eventually death. A compassionate, raw and intimate journey that no one ever chooses to embark on, but one in which the landmarks must be discussed.”—Marika Zemke, Librarian, Commerce Township Public Library

“Every mother’s nightmare—Lu receives a call that her 29 year old son has been seriously injured in a snowboarding accident. She is in England, and she and the rest of the family hurry to the hospital in Innsbruck where doctors are trying to save his life. Is it possible that the adventurous young man with the Oxford degree will come back to them? Is this what Miles would have wanted? How many actually have an advance directive to make things easier if the unthinkable happens? Intense and at times painful to read, this memoir is reminiscent of Joan Didion’s The Year of Magical Thinking.”—Linda Tilden, Librarian, Mt Laurel Public Library
Don't miss news & events from Catapult. Subscribe to the newsletter today.