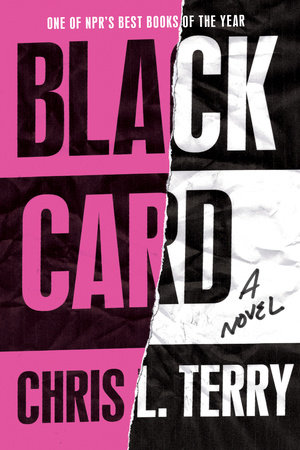 In this NPR Best Book of the Year, a mixed–race punk rock musician must face the real dangers of being Black in America in this “wise meditation on race, authenticity, and belonging” (Nylon).

Chris L. Terry’s Black Card is an uncompromising examination of American identity. In an effort to be “Black enough,” a mixed–race punk rock musician indulges his own stereotypical views of African American life by doing what his white bandmates call “Black stuff.” After remaining silent during a racist incident, the unnamed narrator has his Black Card revoked by Lucius, his guide through Richmond, Virginia, where Confederate flags and memorials are a part of everyday life.

Determined to win back his Black Card, the narrator sings rap songs at an all–white country music karaoke night, absorbs black pop culture, and attempts to date his Black coworker Mona, who is attacked one night. The narrator becomes the prime suspect, earning the attention of John Donahue, a local police officer with a grudge dating back to high school. Forced to face his past, his relationships with his black father and white mother, and the real consequences and dangers of being Black in America, the narrator must choose who he is before the world decides for him.

CHRIS L. TERRY was born in 1979 to an African American father and an Irish American mother. He has an MA in English from Virginia Commonwealth University and a creative writing MFA from Columbia College Chicago. Terry’s debut novel, Zero Fade, was named a Best Book of the Year by Slate and Kirkus Reviews. Terry lives in Los Angeles with his family.

One of NPR's Best Books of the Year

"Perhaps nothing can feel more elusive than determining your own identity, but Chris L. Terry does a magnificent job of dissecting all the ways in which identity both is and isn't a construct in his brilliant new book, Black Card . . . Terry employs a fierce humor throughout the narrative, but don't mistake wit for detachment—this book is deeply moving, a wise meditation on race, authenticity, and belonging." —Kristin Iversen, Nylon

"Hilariously searing . . . As Terry so cleverly and poignantly points out, the narrator's split personality embodies the soul of America itself. And with deadpan comic timing, sensitive insight, and taut, terse prose, Terry plunges the reader into his turmoil. Like nature, racial identity in America abhors a vacuum. If you don't fill in your own identity, as Black Card illustrates, someone else will. Striking a superb balance between levity and heaviness, Terry crafts an enormously fun read about a decidedly less than fun topic." —Jason Heller, NPR

"Author Chris L. Terry deserves credit for skillfully juggling pathos, humor, and anger in a novel that captures the pigeonholing experienced by biracial people trying to fit into a society that looks for either/or categorization . . . The story is powerful and entertaining, and Leon Nixon smoothly delivers Terry’s sly humor, perfectly capturing the roiling emotions of a young man searching for his truest self." —Rochelle M. O’Gorman, The Christian Science Monitor

"Black Card is a bold and affecting novel—funny, infuriating and at times profound. Terry is a new talent who's managed to examine race in America like few writers before him. This fresh and innovative novel explores both whiteness and blackness in contemporary America." —Scott Neuffer, Shelf Awareness (starred review)

"Black Card holds many modes and many moods in its packed and tactile narrative. Chris L. Terry has managed to capture, all at once, the complications of being black, being young, and being in love. This is a detailed ride about finding one's way to the inside, and finding that the inside isn't all you thought it would be. This book is a mirror, inside of which I saw so many selves." —Hanif Abdurraqib, author of They Can't Kill Us Until They Kill Us and Go Ahead in the Rain

"Chris L. Terry is so damn good at peeling back all the tricky layers of race and identity and belonging, and grappling with all the icky stuff of being young and trying to figure out how to be. I'm a '90s kid who spent my afternoons earnestly taping obscure rock songs off college radio in suburban Chicagoland, so Black Card feels like it was written explicitly for me. It's a hilarious and honest examination of race and punk authenticity that's probably gonna feel like it was written for you, too." —Samantha Irby, author of We Are Never Meeting in Real Life

"Black Card is an illuminating portrait of a young man who is confronted by a world that (quite erroneously) feels his blackness and his punkness should be conflicting interests . . . Black Card serves as a document proving [black punks are] not alone in their tastes, in their struggles to connect with others, in their beautiful identities." —Douglas Martin, Passion of the Weiss

"Race is false. Race is real. Chris L. Terry allows these two conflicting truths to dance and spar on the pages of his wickedly funny and daringly smart new novel. Black Card is a wonderful and welcome addition to the growing canon of mixed–race literature." —Danzy Senna, author of Caucasia and New People

"With Black Card, Chris L. Terry has written a sly, funny, melancholy take on race and performing identity in America. A love letter to the DIY scene of the 1990s as well as a portrait of an artist as a young, confused man, this novel is a truly unique exploration of what it takes to build a sense of self in a world dictated by the unbending rules of race and capitalism."—Kaitlyn Greenidge, author of We Love You, Charlie Freeman

"Terry crafts a novel we haven't quite seen before: the rare book about racial identity that eschews heaviness without ever feeling lightweight. Black Card is lively, nuanced, and always a step ahead of the reader. This is a must–read book about navigating life as a biracial person in a nation uncomfortable with any identity that is not white.” —Maurice Carlos Ruffin, author of We Cast a Shadow
Don't miss news & events from Catapult. Subscribe to the newsletter today.