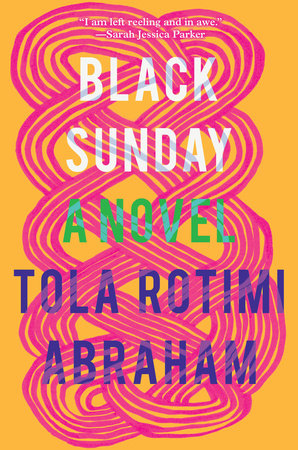 Named a Kirkus Reviews Best Fiction Book of the Year and called “simultaneously unique and universal,” this fiercely original debut novel follows the fate of four siblings over the course of two decades in Nigeria as they search for agency, love, and meaning in a society rife with hypocrisy (NPR).

“I like the idea of a god who knows what it’s like to be a twin. To have no memory of ever being alone.”

Twin sisters Bibike and Ariyike are enjoying a relatively comfortable life in Lagos in 1996. Then their mother loses her job due to political strife, and the family, facing poverty, becomes drawn into the New Church, an institution led by a charismatic pastor who is not shy about worshipping earthly wealth.

Soon Bibike and Ariyike’s father wagers the family home on a “sure bet” that evaporates like smoke. As their parents’ marriage collapses in the aftermath of this gamble, the twin sisters and their two younger siblings, Andrew and Peter, are thrust into the reluctant care of their traditional Yoruba grandmother. Inseparable while they had their parents to care for them, the twins’ paths diverge once the household shatters. Each girl is left to locate, guard, and hone her own fragile source of power.

Written with astonishing intimacy and wry attention to the fickleness of fate, Tola Rotimi Abraham’s Black Sunday takes us into the chaotic heart of family life, tracing a line from the euphoria of kinship to the devastation of estrangement. In the process, it joyfully tells a tale of grace and connection in the midst of daily oppression and the constant incursions of an unremitting patriarchy. This is a novel about two young women slowly finding, over twenty years, in a place rife with hypocrisy but also endless life and love, their own distinct methods of resistance and paths to independence.

Tola Rotimi Abraham is a writer from Lagos, Nigeria. A graduate of the Iowa Writers' Workshop, she has taught writing at the University of Iowa. Her fiction and nonfiction have appeared in Catapult, The Des Moines Register, The Nigerian Literary Magazine, and other venues. Black Sunday is her first novel. She lives in Iowa City.

"I am left reeling and in awe." —Sarah Jessica Parker

"Tola Rotimi Abraham's Black Sunday will destroy you. It won't be an explosion or any other ultraviolent thing. Instead, the novel will inflict a thousand tiny cuts on you, and your soul will slowly pour from them . . . Abraham creates believable characters whose stories could easily have come from real life [that] makes them simultaneously unique and universal, and it makes it easy to understand the way they see the world, even if their lens is ugly . . . Black Sunday is a literary wound that bleeds pain for a while, but you should stay the course, because that's followed by lots of love, beauty, and hope." —Gabino Iglesias, NPR

"A searing debut novel about Nigerian twin sisters whose childhood bond is shattered by the political and social strife that impoverishes their family . . . Abraham explores deeply felt themes of violence, kinship, and self-reliance." —Adrienne Westenfeld, Esquire

"Arresting . . . Abraham writes with a fluid yet deliberate moral compass . . . gripping . . . Exploring themes that delve into the power of storytelling, the fragility of identity, the nature of regret, and the power of redemption, Abraham writes with a grace and sophistication that belie this novel’s debut status. Hers is a voice and a vision to be recognized and watched." —Carol Haggas, Another Chicago Magazine

"Set in Lagos over a period of decades, this absorbing debut follows twin sisters Bibike and Ariyike from the inseparable bonds of relative comfort to the challenges and independence of poverty." —Karla Strand, Ms.

"This may be her first book, but Tola Abraham's storytelling power is immediately apparent—lush, sharp, and shot through with hope!" —Well-Read Black Girl

"An elegant and exciting debut, exquisitely beautiful and painful in equal measure . . . Filled with poetic, vibrant prose and rooted in Nigerian culture, Abraham allows us a glimpse at four lives as they diverge from a single traumatic moment. It’s devastating, in its quiet way, but it’s also funny and sweet and occasionally quite profound." —Jodie Sloan, The AU Review

"Abraham’s fierce debut follows four Nigerian siblings living in Lagos from childhood in 1996 through early adulthood in 2015 . . . The novel’s strength lies in its lush, unflinching scenes, as when a seemingly simple infection leads gradually but inexorably to a life-threatening condition, revealing the dynamics of the family and community along the way. Abraham mightily captures a sense of the stresses of daily life in a family, city, and culture that always seems on the edge of self-destruction." —Publishers Weekly

"[A] piercing, supple debut . . . Abraham stuffs her novel past brimming, but its sophisticated structure and propulsive narration allow her to tuck in a biting critique of corrupt colonial religion and universally exploitative men . . . Twin sisters cut adrift in a perilous, duplicitous world learn that 'only the wise survive.' A formidable debut." —Kirkus Reviews(starred review)
Don't miss news & events from Catapult. Subscribe to the newsletter today.