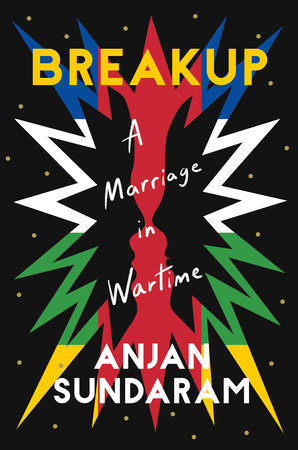 A Marriage in Wartime

Award-winning journalist Anjan Sundaram, hailed as “the Indian successor to Kapuscinski” (Basharat Peer) and praised for “remarkable” (Jon Stewart), “excellent” (Fareed Zakaria), and “courageous and heartfelt” (The Washington Post) work, must reckon with the devastating personal cost of war correspondance when he travels to the Central African Republic to report on preparations for a genocide hidden from the world, leaving his wife and newborn behind in Canada

After ten years of reporting from central Africa for The New York Times, Associated Press, and others, Anjan Sundaram finds himself living a quiet life in Shippagan, Canada, with his wife and newborn. But when word arrives of preparations for ethnic cleansing in the Central African Republic, he is suddenly torn between his duty as a husband and father, and his moral responsibility to report on a conflict unseen by the world.

Soon he is traveling through the CAR, with a driver who may be a spy, bearing witness to ransacked villages and locals fleeing imminent massacre, fielding offers of mined gold and hearing stories of soldiers who steal schoolbooks for rolling paper. When he refuses to return home, journeying instead into a rebel stronghold, he learns that there is no going back to the life he left behind.

Breakup illuminates the personal price that war correspondents pay as they bear witness on the frontlines of humanitarian crimes across the world. This brilliantly introspective, grounded account of one man’s inner turmoil in the context of a dangerous journey through a warzone is sure to become a modern classic.

Anjan Sundaram is the author of Bad News: Last Journalists in a Dictatorship and Stringer: A Reporter's Journey in the Congo. An award-winning journalist, he has reported from central Africa for the New York Times and the Associated Press. His writing has also appeared in Granta, The Guardian, Observer, Foreign Policy, Politico, Telegraph and The Washington Post. His war correspondence from the Central African Republic won a Frontline Club Award in 2015, and his reporting on Pygmy tribes in Congo's rainforests won a Reuters prize in 2006. His work has also been shortlisted for the Prix Bayeux and the Kurt Schork award. Stringer was a Royal African Society Book of the Year in 2014. Anjan graduated from Yale University.

"A compelling journey of hatred and horror, of compassion and courage, through the wreckage left by French imperialism in the Central African Republic, what should be one of the most prosperous and productive countries in the world, leading the way for Africa. I can hardly imagine the bravery it took to compile this invaluable record" —Noam Chomsky

"A wonderful blend of the public and personal, of war and love, told in clear and beautiful language." —Gary Shteyngart, author of Our Country Friends

"War destroys countries. War destroys love. At its heart, Breakup is about a forgotten war in a country far away. But it is also a universal story, beautifully written and passionately told, of a seeker on a dangerous journey, about the power of love and the eventual redemption that a child and family can bring. Breakup captures this in all its pain, joy, sadness, and mystery." —Janine di Giovanni, author of Ghosts by Daylight: Love, War, and Redemption

“I marvel at those journalists who put their lives in peril covering conflicts in countries that most people don’t know exist. Breakup is so gripping that I had to remind myself to breathe. Sundaram’s unflinching reflections on his inner conflict—his doubts, his terror, and the toll his work takes on his marriage—are even more admirable. This is an extraordinary work that will linger in my mind." —Abraham Verghese, author of Cutting for Stone

"Penetrating, courageous, indelible. Anjan Sundaram is an astonishing writer and this is such an important narrative, a terrain so few of us know. We should all read it." —Sunjeev Sahota, author of China Room
Don't miss news & events from Catapult. Subscribe to the newsletter today.