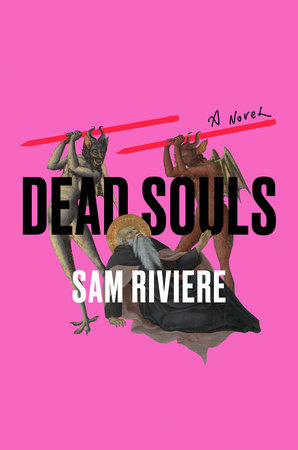 For readers of Roberto Bolaño’s Savage Detectives and Muriel Spark’s Loitering with Intent, this “sublime” and “delightfully unhinged” metaphysical mystery disguised as a picaresque romp follows one poet’s spectacular fall from grace to ask a vital question: Is everyone a plagiarist? (Nicolette Polek, author of Imaginary Museums).

A scandal has shaken the literary world. As the unnamed narrator of Dead Souls discovers at a cultural festival in central London, the offender is Solomon Wiese, a poet accused of plagiarism. Later that same evening, at a bar near Waterloo Bridge, our narrator encounters the poet in person, and listens to the story of Wiese’s rise and fall, a story that takes the entire night—and the remainder of the novel—to tell.

Wiese reveals his unconventional views on poetry, childhood encounters with “nothingness,” a conspiracy involving the manipulation of documents in the public domain, an identity crisis, a retreat to the country, a meeting with an ex-serviceman with an unexpected offer, the death of an old poet, a love affair with a woman carrying a signpost, an entanglement with a secretive poetry cult, and plans for a triumphant return to the capital, through the theft of poems, illegal war profits, and faked social media accounts—plans in which our narrator discovers he is obscurely implicated.

Sam Riviere is the author of a trilogy of poetry books, 81 Austerities (2012) Kim Kardashian's Marriage (2015), and After Fame (2020), all published by Faber, and a book of experimental prose, Safe Mode (Test Centre, 2017). He teaches at Durham University and lives in Edinburgh where he runs the micropublisher If a Leaf Falls Press.

“Mordant, torrential, incantatory, Bolano-esque, Perec-ian, and just so explosively written that I had to stop and shake the language-shrapnel from my hair and wipe it off my eyeglasses so I could keep reading.” —Jonathan Lethem

"A sardonic novel of poetry, plagiarism and literary politics that leans into its nihilism . . . Clever." —Sam Sacks, The Wall Street Journal

“Dead Souls is an exceedingly cerebral comedy about the viability of contemporary poetry . . . One of the wittiest, sharpest, cruelest critiques of literary culture I’ve ever read. Riviere unleashes a flock of winged devils to tear apart the hermetically sealed world of privilege, praise and publication in which a few lucky writers dwell . . . What no summary can convey is the hypnotic effect of Riviere’s relentless prose . . . An astute, wildly original novel that talks trash about everyone whose success galls you. And there’s nothing quite so delicious as that." —Ron Charles, The Washington Post

"A brilliant and brilliantly entertaining novel. The writing is merciless; the rage is genuine . . . Exhilarating." —Toby Litt, The Guardian

"Readers will get caught up in the waywardness of this 300-page single-paragraph novel, following its numerous and surprising digressions wherever they may lead . . . The novel pinches its set-up from Camus’s The Fall, veers close to Thomas Bernhard’s sweeping syntax and yokes together scuzz with the cult of poetry à la Chilean writer Roberto Bolaño . . . By stepping through Dead Souls’ funhouse mirror, we see the current normal reality is as absurd and empty as an email. Yet, running through the novel is a skein of hope; stealing might not be as antisocial as it is usually made out. In fact, a little bit of plagiarism might be one of the most communal acts of all." —Sammi Gale, inews (UK)

"Dead Souls feels fresh, candid, and, though no one dares to use the word in this book, heartfelt." —Tim Parks, The New York Review of Books

“Riviere . . . artfully blends metaphysics, existentialism, ideas of originality, and plagiarism, plus an enticing dose of history and memoir in this captivating read.” —Reader's Digest, A Best Fiction Book of the Year

"The sheer brio and tumbling intelligence of Riviere’s narration lift almost every page. Once you catch the spuming surf of his prose–and, as with Bernhard or Marías, it does take a little time–you’ll want to ride the wave to the shore . . . Wickedly sharp." —Boyd Tonkin, The Arts Desk

"Riviere’s provocative debut novel . . . calls to mind Thomas Bernhard not only for its form but its rhythm and cadence . . . Will appeal to fans of Kate Zambreno’s Drifts." —Publishers Weekly
Don't miss news & events from Catapult. Subscribe to the newsletter today.