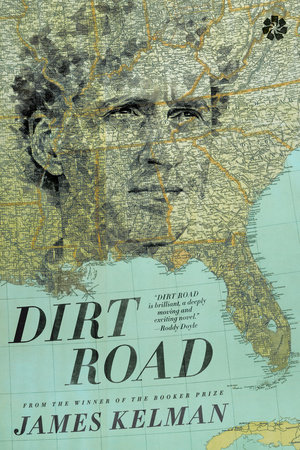 Booker Prize winner James Kelman’s new novel, Dirt Road, tells the story of a teenage boy who travels with his father from Scotland to Alabama to visit with relatives after the death of his mother. In the American South, he becomes swept up into the world of zydeco and blues. “”A powerful meditation on loss, life, death, and the bond between father and son. . . . Kelman has created a fully–realized, relatable voice that reveals a young man’s urgent need for connection in a time of grief.” —Publishers Weekly (starred review)

After his mother’s recent death, sixteen–year–old Murdo and his father travel from their home in rural Scotland to Alabama to be with his émigré uncle and American aunt. Stopping at a small town on their way from the airport, Murdo happens upon a family playing zydeco music and joins them, leaving with a gift of two CDs of Southern American songs. On this first visit to the States, Murdo notices racial tension, religious fundamentalism, the threat of severe weather, guns, and aggressive behavior, all unfamiliar to him. Yet his connection to the place strengthens by way of its musical culture. Murdo may be young but he is already a musician.

While at their relatives’ home, the grieving father and son experience kindness and kinship but share few words of comfort with each other, Murdo losing himself in music and his reticent and protective dad in books. The aunt, “the very very best,” Murdo calls her, provides whatever solace he receives, until his father comes around in a scene of great emotional release.

As James Wood has written of this brilliant writer’s previous work in The New Yorker, “The pleasure, as always in Kelman, is being allowed to inhabit mental meandering and half–finished thoughts, digressions and wayward jokes, so that we are present” with his characters. Dirt Road is a powerful story about the strength of family ties, the consolation of music, and one unforgettable journey from darkness to light.

James Kelman was shortlisted for the Booker Prize in 1989 with his novel A Disaffection, which also won the James Tait Black Memorial Prize for Fiction. He went on to win the Booker Prize five years later with How Late It Was, How Late, before being shortlisted for the Man Booker International Prize in both 2009 and 2011. He has taught at the University of Texas, Austin, and San José State University in California. Kelman was born in Glasgow, Scotland, where he currently lives.

Shortlisted for the Saltire Society Fiction Book of the Year award

A "What to Read Right Now" selection in Vanity Fair

"A kid is trying to overcome his grief without forgetting about it: a contradiction that serves more generally for what's involved in being an immigrant, or in growing up. And Dirt Road is about all of those things." —Benjamin Markovitz, The New York Times Book Review

"Modernist stream of consciousness lives on in the brilliant Dirt Road. . . a narrative as epic as it is quotidian." —Boston Globe

"A powerful meditation on loss, life, death, and the bond between father and son. . . . Kelman has created a fully–realized, relatable voice that reveals a young man’s urgent need for connection in a time of grief." —Publishers Weekly (starred review)

"Beautifully rendered. . . . A rich tale of family, dislocation, the joys of creativity, and the torment of painful choices." —Kirkus Reviews (starred review)

"Kelman has written a moving tribute to the unbreakable bond between fathers and sons." —Booklist (starred review)

"A stirring coming–of–age story, Dirt Road is an examination of family bonds, loss and the power of music." —Read It Forward

""Kelman's writing remains exhilarating and extraordinarily intimate. . . . [A] brilliant and original novel. . . . Dirt Road offers a paean to zydeco and accordion music and to the gritty lives of musicians, but as in Kelman's other books, early and late, underneath it all is a ferocious and infectious kind of love."" —Rain Taxi

"Dirt Road is brilliant, a deeply moving and exciting novel. I’ve always admired Kelman’s work and this had me gripped. I felt I was standing beside Murdo right through the book, and he was great, big, loveable, irritating, wonderful company." —Roddy Doyle, author of Paddy Clarke Ha Ha Ha

"Kelman in the American South, with a zydeco lilt, proves irresistible—a thrilling return from one of our most essential novelists."  —Kevin Barry, author of Beatlebone

"In Dirt Road James Kelman brings alive a human consciousness like no other writer can." —Alan Warner, author of Morvern Callar

"In writing as pure as this, language becomes the very bones and meat of the characters. I am not transported by these sentences into Murdo’s world; I am Murdo." —Ross Raisin, author of God’s Own Country

"Dirt Road is a strange and beautiful thing. . . . It tenderly explores grief and loss and a lonely boy's passion for accordion music. . . . Kelman gives us visceral vernacular, Joycean stream of consciousness, wry humor, old resentments and painful memories, all in counterpoint to the music on and off stage. And there's love. A celebration of what it is to be human." —Lee Langley, The Spectator

"Kelman is one of the most influential writers of his generation, described by Amit Chaudhuri as 'the greatest living British novelist' and an acknowledged influence on Alan Warner, Kirsty Gunn and Irvine Welsh. . . . He conveys with great poignancy the intractable silences and clumsy negotiations of intimacy between Murdo and his father Tom, both wounded by grief and loss following the death of Murdo's mother." —Libby Brooks, The Guardian

"A beautifully–coloured account of loss and love. . . .One of Kelman's gifts as a writer is his ability to describe the world as perceived by his protagonist without resorting to a first–person narrative. Like a camera on Murdo's shoulder, we see the world as the boy sees it, sensing the miracle of his emergence as a confident young man." —Mike Wade, The Times (U.K.)

"The bond between a father and son is at the heart of James Kelman's novel, the beautiful and musical Dirt Road. . . .It is filled with more light and less dark humor than Kelman's previous books." —Nick Major, The National (Scotland)

"The intensity of this novel, as with all of Kelman's, draws you like a magnet. . . .There is anger here, about world politics, religion, gun culture, and the oppression of the poor, but Kelman, for the past three decades our most exciting novelist, trains his deepest insights and fury on a young man trying to understand death. . . .For a story that takes place across a fortnight in which for the most part very little happens, Dirt Road is alive with anticipation." —Rosemary Goring, Herald Scotland

"In Dirt Road we see Kelman continuing to show how human experience can be energized and renewed by its modest scale, not flattened by it into a stereotype. It is another masterpiece from one of our best writers." —Kirsty Gunn, The Guardian

"Poignant and beautiful. . . .This brilliant understated novel ends as it began, with Tom again trying to get Murdo out the door: 'Half six son ye better get up.'" —Anthony Cummins, Independent

"Quietly, subtly Kelman peels back the veil of daily life to reveal the urgent struggle of a sixteen–year–old coming to terms with death. This is a brilliant book, and like all great works of art, it is universal—whether you’re reading it in Scotland, Hampstead, or Alabama." —Sarah Crown, The Times Literary Supplement

"Dirt Road is a life–affirming novel, in which Kelman paints a convincing and at times moving portrait of two likable characters on the road to fulfillment and recovery." —Grace McCleen, The Observer

"So you’ve no duty to read Kelman’s new novel, but you’ll be missing something very good if you don’t, for Dirt Road may well be the best thing he has written. . . . Absorbing and delightful . . . listen to it and be enriched." —Allan Massie, The Scotsman

"The seeming lightness of the novel’s slim plot is freighted with meaning. . . . The hopeful spirit in which Kelman allows Murdo to traverse both his grief and his adventure on the road makes for an engrossing and moving coming–of–age tale." —Carl Wilkinson. The Financial Times

"The Glasgow–born author can offer striking insight into the workings of a human mind, illustrated with an empathy that is perhaps rarely seen in real life." —Rebecca Myers, The Times (UK)

"This Man Booker–winning author is hugely influential for good reason: his writing is vibrant and alive, effortlessly overheard and keenly observed, in a way many novels aspire to be and few achieve." —Cameron Woodhead, The Sydney Morning Herald
Don't miss news & events from Catapult. Subscribe to the newsletter today.