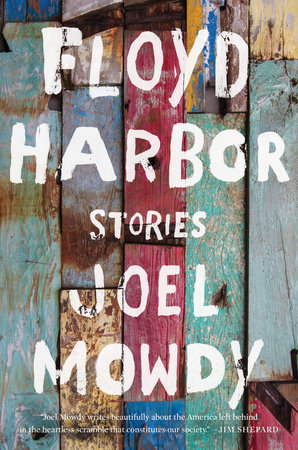 “Floyd Harbor brings to mind Denis Johnson and Irvine Welsh, though it’s also as moving and ecstatic as the early songs of Bruce Springsteen.” —Zachary Lazar, author of Vengeance

Set largely in the 1990s, the twelve linked stories in Joel Mowdy’s first book take place in and around Mastic Beach, a community on New York’s Long Island that’s close to the wealthy Hamptons but afflicted by widespread poverty. Mostly in their teens and early twenties, the characters struggle to become independent in various ways, ranging from taking typical lowpaying jobs—hotel laundry, janitorial, restaurant, and landscaping work—to highly ingenious schemes, to exchanging sexual favors for a place to stay. A few make it to local community colleges; others end up in rehab or juvenile detention centers. However loving, their parents can offer little help. Those who are Vietnam veterans may suffer from PTSD; others may bear the addictions that often come with stressful lives.

Neighborhoods of small bungalows—formerly vacation homes—with dilapidated boats in the driveways hint at the waterways that open up close by. The beauty of the ocean beach offer further consolation, as does the often high–spirited temperament of youth. Joel Mowdy brings to his affecting collection both personal experience and a gift for discerning and lingering on the essential moments in his characters’ stories. He intimately and vividly illuminates American lives that too seldom see the light.

JOEL MOWDY completed the MFA in fiction at the University of Michigan, where he was awarded the Prize in Creative Writing and the Moveen Residency. He grew up with twelve siblings in Mastic Beach, New York, and has worked in progressive education on three continents. He now splits his time homesteading with his wife and son in the forest in Lithuania, and teaching at Green School in Bali, Indonesia. Floyd Harbor is his first book.

"This is an unvarnished Long Island book, relatable to many local readers." —Tom Beer, Newsday

"The air of the closely observed and personal is unmistakable in Joel Mowdy's debut short–story collection, giving these twelve linked pieces an ambient sense of emotional truth and even necessity . . . Mr. Mowdy takes us not so very far geographically from the publication place of this paper, yet it is psychically a great distance, with an economic landscape characterized by the absence of affluence and ease . . . Readers will attach, even find themselves invested in his constellation of seekers, strivers, and survivors." —Evan Harris, The East Hampton Star

"Joel Mowdy’s debut short story collection, Floyd Harbor, is a challenging book . . . Mowdy peoples these stories with characters that are fighting for their lives, shouting above the political dissonance, demanding their chance at the good life. Who can blame them for falling back into old habits, learned helplessness, and the allure of drugs? These stories are raw and vivacious, chest thumping, wild calls against the invisible walls that prevent the characters from breaking out of the metaphorical prisons that surround them . . . His stories contain hope buried among the grime." —Tommy Dean, The Rumpus

"In his impressive first collection of stories, Floyd Harbor, Joel Mowdy explores the darker side of America’s Original Suburb . . . Mowdy never makes a value judgment on the lives and events throughout his collection, but rather portrays a specific area of the country with the intimacy and tenderness of an empathetic observer . . . It is impossible to read these stories without feeling heartache for the universal pain of the human condition that exists within all of us." —AnnaLee Barclay, Atticus Review

"Clearly, [Mowdy] hasn’t forgotten his roots. Neither will you, after reading this indelible account." —Paul Wilner, Zyzzyva

"The 12 connected stories in this debut describe schemes and dreams among the inhabitants of a poor coastal community on Long Island, New York . . . In a stylistically ambitious story, a boy seems drawn in to his father's Vietnam War PTSD and thinks the man's 'breath sounds like a faraway scream' . . . The author has a fine eye, and his prose can see autumn leaves 'fall like loose change from the trees.'" —Kirkus Reviews

“Just miles from the Hamptons, with Manhattan a kind of distant, belittling rumor, stories of desire and loss, crime and trouble, play out among the abandoned docks and potato barns of what had once been a quiet community. In its bleak humor, Floyd Harbor brings to mind Denis Johnson and Irvine Welsh, though it’s also as moving and ecstatic as the early songs of Bruce Springsteen. The part of eastern Long Island portrayed here is Joel Mowdy’s Yoknapatawpha—he knows it and makes us want to know it.” —Zachary Lazar, author of Vengeance

"Of course there's no harbor in Floyd Harbor, a town untouched by Long Island's affluence, and these intricately linked stories' protagonists are dishwashers and salad boys and line cooks, and in rehab and awaiting court appearances; they're kids from broken homes who left high school to start broken homes. They feel like they've never been anywhere, and striving for a little of the comfortable life they've glimpsed, they're the kind of small–time schemers who do most of their thinking in the woods behind the Handy Pantry. But they've never given up on hope, and especially love, since it might stop them from rolling blindly through the rest of their lives, and they're determined to hold out for some acknowledgment of their presence. Joel Mowdy writes beautifully about one part of America left behind in the great heartless scramble that constitutes our society." —Jim Shepard, author of The World to Come

"Joel Mowdy's characters live on the edge of America, a geographical edge but also an economic, even spiritual one where the faded promises of love and money have washed up alongside a flotsam of masculinity, pop culture, and petty crime. These quietly heartbreaking, mordantly funny stories of people just hanging on, hoping for the tide to turn, are must–reads." —Peter Ho Davies, author of The Fortunes

"Joel Mowdy had me with the lines: 'The 7–Eleven was neither a buoy nor a lighthouse. It was a small island.' There's some hard American truth right there. Sometimes, on a rough night, the only thing you can do is take refuge in the 7–Eleven. His people act recklessly and stupidly and on occasion lovingly—in other words, like us human beings. Floyd Harbor is a powerful, soulful, and unpretentious collection of stories. I'm grateful for it." —Peter Orner, author of Am I Alone Here?: Notes on Living to Read and Reading to Live

"Mowdy's stories have stuck with me long after I first read them. This collection of linked stories pulled me in and made the town of Floyd Harbor real for me." —Jason H., Multnomah County Library, One of the Best Books of the Year
Don't miss news & events from Catapult. Subscribe to the newsletter today.