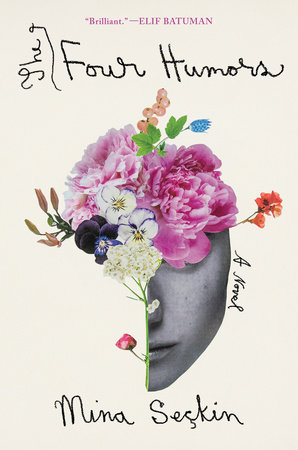 This wry and visceral debut novel follows a young Turkish-American woman who, rather than grieving her father’s untimely death, seeks treatment for a stubborn headache and grows obsessed with a centuries-old theory of medicine.

Mina Seçkin is a writer from Brooklyn. Her work has been published in McSweeney’s Quarterly Concern, The Rumpus, and elsewhere. She serves as managing editor of Apogee Journal, and The Four Humors is her first novel.

"An engrossing exploration of national identity, the meaning of family and loss, and what happens when a family hides its central secret . . . Read The Four Humors for an insider's travelogue of Istanbul and its volatile modern political history, and for the tastes and feel of contemporary Turkish culture. Read it too, to get to know a wonderful set of characters—women in all their flaws and generosities—and for an astute account of what it means to be an immigrant in America. Finally, read it to follow one young woman's beautifully-rendered journey into her past, so that she can wrest herself from stasis and step into her future." —Martha Ann Toll, NPR

"In spare, funny writing, Seçkin invites us into a summer spent in Turkey with a young woman named Sibyl and her boyfriend, Cooper . . . If you've ever abandoned plans to study for the MCAT in favor of a lot of soul-searching, uncovering family trauma, and TV watching, come meet Sibyl." —Jenny Singer, Glamour

"If stories expand us, secrets shrink us, as this deep, wise, and intricate debut novel by Mina Seçkin illustrates." —Jeffrey Ann Goudie, The Boston Globe

"Mina Seçkin’s debut novel chronicles Sibel’s attempts to understand herself, her family, and the stories her body tells about both with tenderness and grace." —Eve Sneider, WIRED

"[An] expansive novel about a grieving young woman, generations of her family, the mysteries and fallibilities of health and illness narratives, and the geopolitical and cultural histories we all carry . . . [Seçkin's] dynamic writing carries the reader on a multifaceted journey through time and psychological and physical landscapes." —Sarah Neilson, Shondaland

"A funny and loving story for readers of all backgrounds." —Emily Burack, Alma

"An engaging read that addresses both the Turkish diaspora and what it means to change." —Wendy J. Fox, BuzzFeed

"I am elated when, every once in a while, I come across a book with the potential to create a whole new literary canon of its own. Mina Seçkin's debut book The Four Humors flung me into an uncharted territory of literary fiction . . . [B]oth intellectually and viscerally intense." —Nidhi Verma, Platform Magazine

"A deliciously bittersweet meditation on the elastic, shifting narratives we weave from the fragile threads of our daily existence, the people around us, and the places we call home . . . What holds these unraveling characters together is Seçkin’s precise, direct prose, which balances the grotesque with the beautiful, the funny with the genuinely moving. With lyricism and blunt, humorous honesty, Seçkin pokes and prods at the complexities of family history and personal identity from different angles." —Malena Steelberg, Los Angeles Review of Books

"Fans of Elif Batuman’s The Idiot should take note of Mina Seçkin’s debut The Four Humors, another wry and intelligent novel that engages with the Turkish diaspora in America. As twenty-year-old Sibel seeks relief from an unshakable headache, she ends up delving into her family history and dubious medicinal theories, all of which Seçkin captures with a mordant wisdom that belies her own young age." —Chicago Review of Books

"Mina Seçkin writes about the human body in a way that is exacting and beautiful, and I am in awe at the way she pins pain onto the page . . . The narrative voice is infused with levity, generosity, and (yes) humor. The Four Humors is a gorgeous excavation of the body—its flaws and its desires—and what it means to heal." —Katie Yee, Literary Hub

"Like the Russian soap operas that Sibel and her grandmother watch devotedly, The Four Humors unfolds at a leisurely pace, with an extensive cast of characters and a multigenerational plot . . . You'll find yourself hooked." —Thane Tierney, BookPage

"Seçkin’s lively prose and empathic portrayal of her characters make for an evocative and entertaining first novel." —Booklist

"[A] perceptive debut . . . Seçkin moves with poise from Sibel’s modern-day, deadpan tone to the stories of her older relatives, which are related as stand-alone narratives and are often entangled with Turkey’s tempestuous political history . . . A moving family story." —Publishers Weekly

“Mina Seçkin’s brilliant and understated first novel describes a young person’s quest to situate herself geographically, culturally, historically, and physiologically—to map out a place for her inner self in the world, in her family, and in her own body. Funny, heartrending, illuminating, informative, brimming with cultural specificity and human universality.” —Elif Batuman, author of The Idiot
Don't miss news & events from Catapult. Subscribe to the newsletter today.