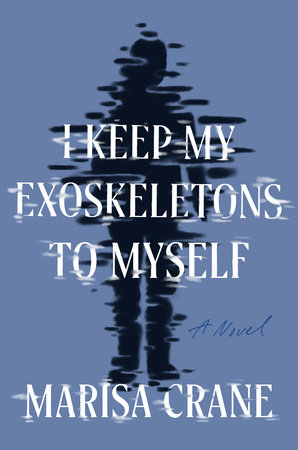 I Keep My Exoskeletons to Myself

Dept. of Speculation meets Black Mirror in this lyrical, speculative debut about a queer mother raising her daughter in an unjust surveillance state

In a United States not so unlike our own, the Department of Balance has adopted a radical new form of law enforcement: rather than incarceration, wrongdoers are given a second (and sometimes, third, fourth, and fifth) shadow as a reminder of their crime—and a warning to those they encounter. Within the Department, corruption and prejudice run rampant, giving rise to an underclass of so-called Shadesters who are disenfranchised, publicly shamed, and deprived of civil rights protections.

Kris is a Shadester and a new mother to a baby born with a second shadow of her own. Grieving the loss of her wife and thoroughly unprepared for the reality of raising a child alone, Kris teeters on the edge of collapse, fumbling in a daze of alcohol, shame, and self-loathing. Yet as the kid grows, Kris finds her footing, raising a child whose irrepressible spark cannot be dampened by the harsh realities of the world. She can’t forget her wife, but with time, she can make a new life for herself and the kid, supported by a community of fellow misfits who defy the Department to lift one another up in solidarity and hope.

With a first-person register reminiscent of the fierce self-disclosure of Sheila Heti and the poetic precision of Ocean Vuong, I Keep My Exoskeletons to Myself is a bold debut novel that examines the long shadow of grief, the hard work of parenting, and the power of queer resistance.

MARISA CRANE is a writer, basketball player, and sweatpants enthusiast. Their work has appeared or is forthcoming in Joyland, No Tokens, TriQuarterly, Passages North, Florida Review, Catapult, Lit Hub, The Rumpus, and elsewhere. An attendee of the Tin House Workshop and Bread Loaf Writers' Conference, they currently live in San Diego with their wife and child. I Keep My Exoskeletons to Myself is their first novel.

"Marisa Crane’s I Keep My Exoskeletons to Myself is a captivating portrait of queerness, grief, and redemption that challenges assumptions about parenting and justice. Crane’s sharp and funny dystopian novel explores how easy it is to become our worst selves, and how hard it is to recover from life-changing mistakes. " —Isle McElroy, author of The Atmospherians

“In I Keep My Exoskeletons to Myself, Marisa Crane writes with immense beauty and ferocity about surveillance and injustice, grief and love. Kris is an unforgettable guide through the novel's speculative world, at once hilarious and heart-sick, and her furiously lyric voice will haunt you long after the final page. I loved this powerfully original debut.” —Laura van den Berg, author of I Hold a Wolf by the Ears

"Marisa Crane writes of queer parenthood with razor-sharp precision: you could cut yourself on her sentences, or you could find in them a gorgeous, subversive home. With a voice as innovative as it is boldly honest, I Keep My Exoskeletons to Myself offers us a speculative world that refracts, mirrors, and expands our own." —Carolina De Robertis, author of The President and the Frog

"Marisa Crane's I Keep My Exoskeletons to Myself is a delicious novel of ideas that made me consider justice, grief, desire, and friendship. It also made me laugh out loud. Crane's blend of grief, humor, and imagination is fearless. They have a rollercoaster of an imagination—this is an exciting debut and the start of a promising career." —Megan Giddings, author of Lakewood and The Women Could Fly