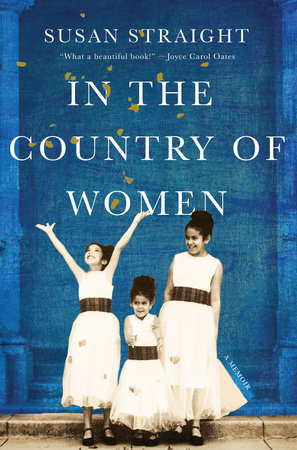 In the Country of Women

One of NPR’s Best Books of the Year

“Straight’s memoir is a lyric social history of her multiracial clan in Riverside that explores the bonds of love and survival that bind them, with a particular emphasis on the women’s stories . . . The aftereffect of all these disparate stories juxtaposed in a single epic is remarkable. Its resonance lingers for days after reading.” —San Francisco Chronicle

In the Country of Women is a valuable social history and a personal narrative that reads like a love song to America and indomitable women. In inland Southern California, near the desert and the Mexican border, Susan Straight, a self–proclaimed book nerd, and Dwayne Sims, an African American basketball player, started dating in high school. After college, they married and drove to Amherst, Massachusetts, where Straight met her teacher and mentor, James Baldwin, who encouraged her to write. Once back in Riverside, at driveway barbecues and fish fries with the large, close–knit Sims family, Straight—and eventually her three daughters—heard for decades the stories of Dwayne’s female ancestors. Some women escaped violence in post–slavery Tennessee, some escaped murder in Jim Crow Mississippi, and some fled abusive men. Straight’s mother–in–law, Alberta Sims, is the descendant at the heart of this memoir. Susan’s family, too, reflects the hardship and resilience of women pushing onward—from Switzerland, Canada, and the Colorado Rockies to California.

“Certain books give off the sense that you won’t want them to end, so splendid the writing, so lyrical the stories. Such is the case with Southern California novelist Susan Straight’s new memoir, In the Country of Women . . . Her vibrant pages are filled with people of churned–together blood culled from scattered immigrants and native peoples, indomitable women and their babies. Yet they never succumb . . . Straight gives us permission to remember what went before with passion and attachment.” ––Los Angeles Times

SUSAN STRAIGHT has published eight novels, including Highwire Moon, Between Heaven and Here, and A Million Nightingales. She has been a finalist for the National Book Award, the Los Angeles Times Book Prize, and the National Magazine Award. She is the recipient of the Robert Kirsch Award for lifetime achievement from the Los Angeles Times Book Prize, the Edgar Award for Best Short Story, the O. Henry Prize, the Lannan Literary Award for Fiction, and a Guggenheim Fellowship. Her stories and essays have been published in The New Yorker, The New York Times, the Los Angeles Times, The Guardian, Granta, McSweeney’s, Black Clock, Harper’s, and other journals. Her work has been translated into Spanish, German, French, Arabic, Turkish, Japanese, Romanian, Swedish, and Russian. She is Distinguished Professor of Creative Writing at the University of California, Riverside. She was born in Riverside, where she lives with her family.

"In the end, Straight’s book is about far more than a country of women. It’s an ode to the entire multiracial, transnational tribe she claims as her own . . . In fact, her words are for all those who now call her mother, aunt, cousin and sister, in the neighborhood where she has lived her entire life. And for all those who survived, so these women could live." —Kristal Brent Zook, The New York Times Book Review

"While Straight reflects on far more than her own upbringing and experiences growing up, she brings her trademark lyricism and a significant dose of humility to those segments of the book . . . Not all the women Straight introduces us to are mothers, but it seems fitting that her book's final chapter also is addressed to her daughters . . . Straight's gift to them—the story of where they come from and the amazing women who have shaped their lives—nicely doubles as a gift for us." —Ericka Taylor, NPR

"Straight’s skillful ability to take us from the intimacy of family history to the wider considerations of America’s legacy is a wonder. This is not only a story of women, but of immigration, police brutality and the history of slavery . . . Straight captures an American story in all its ugly complexity." —Crystal Hana Kim, The Washington Post

"Lauded fiction writer Straight turns to memoir in this innovative and emotional exploration of the women in her and her husband’s lives, addressed to her daughters so they can know the stories of who came before them." —Entertainment Weekly

"Certain books give off the sense that you won’t want them to end, so splendid the writing, so lyrical the stories. Such is the case with Southern California novelist Susan Straight’s new memoir, In the Country of Women . . . Her vibrant pages are filled with people of churned–together blood culled from scattered immigrants and native peoples, indomitable women and their babies. Yet they never succumb . . . Straight gives us permission to remember what went before with passion and attachment." —Janet Kinosian, Los Angeles Times

"Susan Straight wrote this family history for her three daughters—and we’re lucky that she shared it with the rest of us. Theirs is a saga full of independent, brave, tough women . . . This is the story of America, through the lens of one family." —Elena Nicolau, Refinery29

"With stirring details and delving perceptions, Straight chronicles the repercussions, generation after generation, of enslavement, Jim Crow, and immigration, as well as rape, murder, grueling work, and single motherhood, while tracing the journeys of the women in her clan to Canada, Mississippi, Arkansas, Oklahoma, Colorado, Arizona, and, finally, gritty, multicultural Riverside, California, Straight’s hometown. As Straight braids her three daughters into this deeply affecting saga, she maps her path to becoming a writer, encouraged by her mentor, James Baldwin, and profoundly inspired by her mother–in–law. Ultimately, this is a ravishing and revelatory celebration of womanhood, resilience, family, community, and America’s defining diversity." —Booklist (starred review)

“What a beautiful book! In the Country of Women must be the most populated, celebratory, filled–with–life memoir of our time. With her characteristic mix of compassion, warmth, humor, and acerbic insight, Susan Straight writes of her ‘massive black and mixed–race family’ and her ‘quirky, deeply embedded white family’—a memoir that is, though addressed to her three daughters, a valentine to virtually everyone whom the renowned author has known in the course of her vividly described life.” —Joyce Carol Oates
Don't miss news & events from Catapult. Subscribe to the newsletter today.