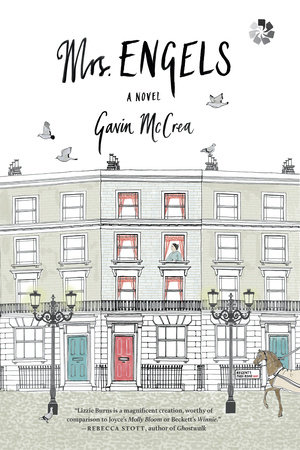 “The illiterate lover and eventual wife of a coauthor of The Communist Manifesto is the star of this enthralling work of historical fiction.” —O: The Oprah Magazine

“Lizzie has been brought to life with exuberant force.” —The New York Times

“Impressive. . . . A memorable portrait of a woman looking for a cause of her own, distinct from the one made famous by her husband.” —The Wall Street Journal

“Lizzie is as spirited a narrator as a reader could hope to encounter.” —The Minneapolis Star Tribune

Very little is known about Lizzie Burns, the illiterate Irishwoman and longtime lover of Frederick Engels, coauthor of The Communist Manifesto. In Gavin McCrea’s debut novel, Lizzie is finally given a voice that won’t be forgotten.

Lizzie is a poor worker in the Manchester, England, mill that Frederick owns. When they move to London to be closer to Karl Marx and family, she must learn to navigate the complex landscapes of Victorian society. We are privy to Lizzie’s intimate, wry views on Marx and Engels’s mission to spur revolution among the working classes, and to her ambivalence toward her newly circumstances.

Yet despite their profound differences, Lizzie and Frederick are drawn together in this high–spirited love story.

Gavin McCrea was born in Dublin in 1978 and currently lives in London and northern Spain. He holds an MA and a PhD from the University of East Anglia. Mrs. Engels is his first novel.

"Lizzie has been brought to life with exuberant force by the first–time author Gavin McCrea.” —Carmela Ciuraru, The New York Times

"Impressive. . . .Mr. McCrea draws sharp ironies from the gap between theory and actuality. . . .A man can help you rise in the world, Lizzie remarks, in one of the many bluff, indelicate observations that give her narration its charisma: 'All you have to do is pick him out right and play him well.'. . .A memorable portrait of a woman looking for a cause of her own, distinct from the one made famous by her husband."—Sam Sacks, The Wall Street Journal

“The illiterate lover and eventual wife of a coauthor of The Communist Manifesto is the star of this enthralling work of historical fiction." —O, The Oprah Magazine>

“McCrea's debut is a historical novel told through the unforgettable voice of Lizzie Burns, the longtime lover of Frederick Engels. Pulled up from her working–class roots after she meets Engels, Lizzie is nonetheless excluded from upper–class society and haunted by her former flame as she struggles to find her purpose. Sparkling with energy, Lizzie is one of the year's best characters." —Best Books of 2015, Publishers Weekly

“Friedrich Engels is a frequent name in history books. He was Karl Marx's Communist collaborator, penning several influential texts of the era. It may seem surprising, then, considering his academic pedigree, that his wife was illiterate and uneducated — but truth is often stranger than fiction”

“McCrea turns the larger–than–life character of Lizzie Burns, Engels' common–law wife, into one of the most compelling protagonists of the year. "Mrs. Engels" is historical fiction of the finest kind, where fact and fiction mix for the better of both." —Top Fiction Picks of 2015, Minnesota Public Radio

“Lizzie is as spirited a narrator as a reader could hope to encounter. As channeled by McCrea, she can turn a humble sentiment into an extraordinary image, and if expressive language is your thing, you need to read Mrs. Engels . . . [McCrea] has reached into history and constructed a rich fictional saga around a woman most American readers won’t have spent any time at all thinking about. Historians know a lot more about Engels than they do about Elizabeth Burns, but McCrea has rendered her unforgettable, a model of resolve with an extraordinary narrative voice." —The Minneapolis Star Tribune

“McCrea’s richly imagined debut novel is narrated by Irishwoman Lizzie Burns, the longtime lover of The Communist Manifesto coauthor Frederick Engels. . . McCrea gives the illiterate Lizzie a vivid, convincing voice, sparkling with energy and not untouched by pathos. Her sharp, pragmatic observations offer a human perspective on historical icons (Marx has boils, while Engels is overwhelmed by letters from his mother). But the heart of the novel is the beautifully realized romance between Lizzie and Frederick: a mismatch of values and temperaments, yet also a tender and complex bond." —starred review, Publishers Weekly

“Irish–born McCrea's stellar debut imagines the lives of Karl Marx and Frederick Engels, not men usually associated with romance, through the eyes of Engels' illiterate common–law wife, Lizzie Burns. Lizzie's voice—earthy, affectionate, and street–smart but also sly, unabashedly mercenary, and sometimes–scheming—grabs the reader from the first sentence and doesn't let go. . . Who knew reading about communists could be so much fun."—starred review, Kirkus Reviews

“First–novelist McCrea well captures Lizzie’s fiery temperament, vivid voice, and complicated relationship with Engels, whom she both longs to marry and longs to be free of. Moving, finely detailed, rife with full–bodied, humanizing portraits of historical icons, and told in striking prose, this is a novel to be savored." —starred review, Booklist

“A dazzling first novel. . . . Fascinating as Lizzie's narrative and characterization are, it's the writing itself that brings her story to life. The prose in Mrs. Engels is colorful, unpredictable, occasionally dense with meaning, always cleverly stylized and beautifully wrought. McCrea, appropriately for an Irish writer, invents a kind of contemporary Joycean mélange (in some of the commentary on this novel, Lizzie has been compared to Molly Bloom) of words familiar and words invented. . . . Since so little is known about the historical Lizzie Burns, Gavin McCrea had a great deal of license in portraying her, a freedom he exploits brilliantly. It is her earthiness that has prompted critics to compare her to Molly Bloom—Lizzie, for instance, narrates a number of most unsentimental sex scenes—and Mrs. Engels implicitly suggests another parallel in Gustave Flaubert's greatest creation, his characterization of Emma Bovary. . . . In Mrs. Engels, from its eloquent first paragraph to its superb last sentence, Gavin McCrea performs a remarkable feat of language that invites comparison with the best of recent first novels. It is bound to be widely discussed and, surely more important, to endure.” —Greg Johnson, The Yale Review

“Through Lizzie’s singular perspective, peppered with her wry observations, readers are treated to a backstage look at the domestic lives of the most public 19th–century revolutionaries and their families. While Lizzie’s story exists only marginally in the historical record, first–time novelist McCrea brings her to life in this soulful work.” —Library Journal

“Mrs. Engels explores the subtleties of a historic movement through the vantage of Lizzie Burns, Frederick Engels’ longtime companion and eventual wife.. . . Her position allows the story’s perspective to refreshingly shift from observing Engels and Marx’s work life and ideals to registering the domestic decorum and politics that have shaped Lizzie’s life. As Frederick imagines what could be, resenting the illusory social norms that dictate what is, Lizzie, to survive, must occupy herself with the very reality he and his peers frequently abhor or ignore." —ZYZZYVA Magazine

“This debut novel is told in the voice of Lizzie Burns, Communist Manifesto co–author Friedrich Engels’s longtime lover. The illiterate Lizzie left no records so McCrea has had to imagine her into existence – which he has done impressively." —The National Book Review

“Enormously rich and complex. . . Lizzie's voice is tremendously well handled and Victorian London, as described through her wry eyes, explodes on the page."— BookBrowse