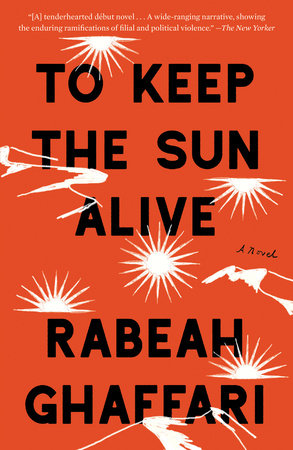 To Keep the Sun Alive

“[A] tenderhearted début novel . . . A wide–ranging narrative, showing the enduring ramifications of filial and political violence.” —The New Yorker

The year is 1979. The Iranian Revolution is just around the corner. In the northeastern city of Naishapur, a retired judge and his wife, Bibi–Khanoom, continue to run their ancient family orchard, growing apples, plums, peaches, and sour cherries. The days here are marked by long, elaborate lunches on the terrace where the judge and his wife mediate disputes between aunts, uncles, nieces, and nephews that foreshadow the looming national crisis to come. Will the monarchy survive the revolutionary tide gathering across the country? Will the judge’s brother, a powerful cleric, take political control of the town or remain only a religious leader?

And yet, life goes on. Bibi–Khanoom’s grandniece secretly falls in love with the judge’s grandnephew and dreams of a career on the stage. His other grandnephew withers away on opium dreams. A widowed father longs for a life in Europe. A strained marriage slowly unravels. The orchard trees bloom and fruit as the streets in the capital grow violent. And a once–in–a–lifetime solar eclipse, set to occur on one of the holiest days of year, finally causes the family—and the country—to break.

Told through a host of unforgettable characters, ranging from servants and young children to intimate friends, To Keep the Sun Alive reveals the personal behind the political, reminding us of the human lives that animate historical events.

“How do we recognize the moment our future has been written for us? In To Keep the Sun Alive, as the Islamic Revolution looms just outside the gate of an Iranian family orchard, Rabeah Ghaffari has built a world so lush, so precise that you will find yourself rewriting history if only to imagine it could still exist.”—Mira Jacob, author of The Sleepwalker’s Guide to Dancing

RABEAH GHAFFARI was born in Iran and lives in New York City. She is a filmmaker and writer whose collaborative fiction with artist Shirin Neshat was featured in Reflections on Islamic Art, and whose documentary, The Troupe, featured Tony Kushner. Her most recent feature–length screenplay, The Inheritors, was commissioned by producer/costume designer Patricia Field. To Keep the Sun Alive is her first novel.

Praise for To Keep the Sun Alive

"[A] tenderhearted début novel . . . A wide–ranging narrative, showing the enduring ramifications of filial and political violence." —The New Yorker

"In her debut novel, Ghaffari addresses the political concerns of the period through an intense portrait of a family struggling against them." —Annabel Gutterman, Time

"The dynamic family story is a moving exploration about how our political environments and affiliations can make us question and test our deepest relationships." —Samantha Zabell, Apartment Therapy

"Told through a host of unique characters, including servants, children, and friends, To Keep the Sun Alive tells the largely untold personal stories behind one of modern world history's most important political moments." —Sadie Trombetta, Bustle

"From page 1 on, you'll be deeply invested in the story of a large family affected by the Iranian Revolution in the '70s . . . Ghaffari's saga is so evocative you'll nearly be able to smell the orange trees in the family's orchard." —Elena Nicolaou, Refinery29

"Ghaffari’s novel examines the lives of Iranians from different walks of life—retired judges, children, servants—as they go about their business amidst political turmoil and strife." —Sarah Stiefvater, PureWow

"More than the Iranian revolution, it’s a meditation on the nature of stories—the way they shape our lives and the power they have to not only enrich, but sustain us." —Rachel León, Chicago Review of Books

"Rabeah Ghaffari’s story set during the 1979 Iranian Revolution is more than a history lesson. The saga is a character study about how our place in the world is viewed by others, but more importantly, what our place in the world means to us."" —Adam Vitcavage, Electric Literature, 1 of the 20 Best Debut Novels of the Year

"An intimate yet sprawling chronicle of life in Iran before and during its revolutionary years . . . The stories she tells of Iran are rendered in authoritative fashion—only fitting for a book that is about the persistence of memory. They fulfill To Keep the Sun Alive’s mission of capturing a specific place and time." —Foreword Reviews

"This is the rarest kind of novel, one which loves as much as it teaches. Its characters burrow into your heart, and there you will want them to stay . . . A true and complete delight." —Will Harris, Books and Bao

"Ghaffari is an empathetic writer, able to suffuse even the smallest character with a rich inner life. The web she weaves between the personal and political is so intricate, To Keep the Sun Alive warrants more than one read." —The Rumpus

"Ghaffari’s exciting debut is a family epic centered on several months in 1979 . . . Ghaffari weaves each character’s deep history into the novel, creating a very complete world. Her poetic prose relays deep and intimate emotion in a single line; its richness makes characters' joys and tragedies palpably felt by readers, too. This is a beautifully written story of a family's upheaval and its roots in their own history." —Booklist (starred review)

"Evocative debut set during the Iranian Revolution . . . Ghaffari delves into her characters with sensitivity for their positions and differences. Readers will savor the emotional depth of one family’s experience of the terrifying effects of religious fundamentalism and political instability." —Publishers Weekly

"In her lush and atmospheric debut, author Ghaffari sketches a complex portrait of a country on the brink of revolution and explores the poignant ways political unrest can bind or tear families apart . . . A nuanced, character–driven exploration of a formative moment in a country's complicated history. An evocative and deeply felt narrative portrait." —Kirkus Reviews

"Written in rich, enrapturing prose, To Keep the Sun Alive transports us into the world of a vibrant, multigenerational family and their ancestral fruit orchard. Rabeah Ghaffari evokes an Iran on the brink of revolution, in a story of love, uprising, familial bonds, and the lives behind history books." —Hala Alyan, author of Salt Houses

"How do we recognize the moment our future has been written for us? In To Keep the Sun Alive, as the Islamic Revolution looms just outside the gate of an Iranian family orchard, Rabeah Ghaffari has built a world so lush, so precise that you will find yourself rewriting history if only to imagine it could still exist."" —Mira Jacob, author of The Sleepwalker's Guide to Dancing
Don't miss news & events from Catapult. Subscribe to the newsletter today.