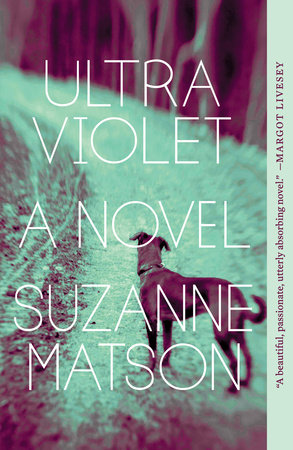 Named a Best Book of the Year by Real Simple

“This unostentatious yet intricate novel follows the women of a family across nearly a century . . . Domestic scenes emit blasts of emotional life, as the women grapple with the ‘swooning collapse and then the expanding distance’ between their interior lives and the outside world.” —The New Yorker

Suzanne Matson’s engrossing and intimate new novel, Ultraviolet, centers on Kathryn—the daughter of Elsie and mother of Samantha— while illuminating the lives of three generations of women, each more independent than the last.

Their stories open in 1930s India, where Elsie lives with her authoritarian missionary husband and their children. Returning to the American Midwest as a teenager, Kathryn feels alienated and restless. When she loses her mother prematurely to a stroke, she escapes to Oregon for a fresh start. Disappointed that her education was cut short by her father, and dreaming of becoming a writer, she supports herself as a waitress in wartime America, dating soldiers, then meeting and marrying Finnish–American Carl. A construction worker sixteen years her senior, he is an unlikely match, though appealing in his care – free ways and stark difference from her Mennonite past. But Kathryn ends up feeling trapped in the marriage, her ambitions thwarted. Samantha, who’s grown up in the atmosphere of her mother’s discontent, follows her own career to teach at a university in faraway Boston, where she maintains a happy family of her own.

When Kathryn starts to fail, Samantha moves her mother near her to care for, and then to watch over her deathbed, where “something in the room— the spell, the cord knitting them together—is cut. Or no, that can’t be right, either.” Ultraviolet is a lyrical novel of great emotional depth. Suzanne Matson recognizes both the drama that is within every existence and the strengths and fragilities of our relationships with others. She shines a brilliant light on the complexities of marriage, motherhood, aging, and the end of life.

Suzanne Matson was born in Portland, Oregon, and studied at Portland State University and the University of Washington. Her first novel, The Hunger Moon, was a Barnes & Noble Discover Great New Writers pick. Her third, The Tree–Sitter<?i>, was short–listed for the PEN New England/L. L. Winship Award. She has published two poetry collections with Alice James Books, teaches at Boston College, and lives in Newton, Massachusetts.

"This unostentatious yet intricate novel follows the women of a family across nearly a century . . . Domestic scenes emit blasts of emotional life, as the women grapple with the 'swooning collapse and then the expanding distance' between their interior lives and the outside world." —The New Yorker

“This gorgeous novel examines the complexities of the mother–daughter relationship.”— Real Simple

"This sprawling, beautiful novel follows the lives of three generations of women. . . It's an emotional, poignant look at the ways in which our dreams for ourselves often fall apart, and how even lives that seem quietly lived are filled with profound meaning." —Kristin Iversen, NYLON

“Explores the lives of several generations of one family across America and overseas—and in doing so ventures to unexpected emotional states.” —Vol. 1 Brooklyn

“Fascinating and stirring . . . . Matson glides through her characters’ lives in almost self–contained chapters punctuated by explosions of burnished emotion . . . . Readers will latch onto the unforgettable characters of this accomplished saga of the shifting personal and historical complications of American womanhood.”—Publishers Weekly (starred and boxed review)

“Fans of Anne Tyler and Geraldine Brooks will enjoy the intertwined, intergenerational narratives, historical details, and emotional depth of this engrossing novel.”—Booklist

“Matson's chapters, each of which jumps forward in time, conclude with an especially poignant reflection on aging, as Samantha cares for her dying mother in her final days. This is a stoic view of mother–daughter love: an unsentimental reflection on both the tribulations and the importance of filial connection.”—Kirkus

“From its wonderful opening in 1930s India, Suzanne Matson's beautifully accurate and illuminating Ultraviolet follows the fates of three generations of American women, along the shifting borders of safety and freedom. As time carries them past risks and refuges, the reader is left with a shimmering sense of lives lived.”—Joan Silber, author of Improvement

“Capacious, unsentimental and yet forgiving, Ultraviolet brings us both the intimacy of women's lives and their trajectories across continents and generations. This is Suzanne Matson at her wisest and deepest—wonderful.”—Gish Jen, author of The Girl at the Baggage Claim

“Acutely, elegantly, Suzanne Matson traces her characters' paths from the hills of colonial India to the suburban American west to the dislocated excesses of an Alaska cruise ship. Here are the women in a family and the impact they have—or fail to have—on one another. And here, in the silences between vivid moments, we see how years pass, how lives pass, how a century passes.”—Joan Wickersham, author of The News from Spain and The Suicide Index