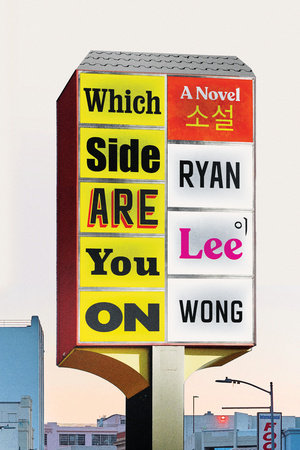 Which Side Are You On

How can we live with integrity and pleasure in this world of police brutality and racism? An Asian American activist is challenged by his mother to face this question in this powerful—and funny—debut novel of generational change, a mother’s secret, and an activist’s coming-of-age

Twenty-one-year-old Reed is fed up. Angry about the killing of a Black man by an Asian American NYPD officer, he wants to drop out of college and devote himself to the Black Lives Matter movement. But would that truly bring him closer to the moral life he seeks?

In a series of intimate, charged conversations, his mother—once the leader of a Korean-Black coalition—demands that he rethink his outrage, and along with it, what it means to be an organizer, a student, an ally, an American, and a son. As Reed zips around his hometown of Los Angeles with his mother, searching and questioning, he faces a revelation that will change everything.

Inspired by his family’s roots in activism, Ryan Lee Wong offers an extraordinary debut novel for readers of Anthony Veasna So, Rachel Kushner, and Michelle Zauner: a book that is as humorous as it is profound, a celebration of seeking a life that is both virtuous and fun, an ode to mothering and being mothered.

RYAN LEE WONG was born and raised in Los Angeles, lived for two years at Ancestral Heart Zen Temple, and currently lives in Brooklyn, where he is the administrative director of Brooklyn Zen Center. Previously, he served as program director for the Asian American Writers’ Workshop and managing director of Kundiman. He has organized exhibitions and written extensively on the Asian American movements of the 1970s. He holds an MFA in fiction from Rutgers University–Newark. Which Side Are You On is his first book.

“This book! In Ryan Lee Wong's hard-hitting and witty novel, two generations of Asian American political activists negotiate their relationships with movements, history, L.A., and one another. Wong handles his narrator's earnestness with understated brilliance—especially when he skewers that very same sincerity. Sure to spark conversations.” —YZ Chin, Entertainment Weekly

"Blasting easily woke platitudes, this honest, hilarious, and deeply healing novel gets at the heartbreaking core of building connections between families and friends, and solidarities within and between racial communities. For years I've been waiting for a novel like Ryan Lee Wong's Which Side Are You On, and I urge everyone to read it. It is an astonishing debut." —Cathy Park Hong, author of Minor Feelings

"Sharp, fast-moving, and often hilarious, Which Side Are You On is a must-read: a story of Asian American relationships—familial, intergenerational, and otherwise—through the lens of Black-Asian histories, community organizing, and radical politics." —Lisa Ko, author of The Leavers

"Salty, funny, angry, and heartbreaking, Which Side Are You On synthesizes the struggles of a family that has been working and hoping for a better world for two, maybe three, generations, and in the process, renews our sense of the histories involved—American history, Korean American history, Black history, Los Angeles history. This is a stunning debut, but also a novel I didn't know I was waiting for." —Alexander Chee, author of How to Write an Autobiographical Novel

"With terrific, original use of language; a flawed, highly sympathetic protagonist; a fast pace; and a tone that is at once irreverent and sober, Which Side Are You On offers unusual insight into Asian-Black dynamics and the fight for racial justice in America. Ryan Lee Wong is an impactful new voice." —Bisi Adjapon, author of The Teller of Secrets

"Which Side Are You On is a sharp and refreshing debut that tenderly plumbs the depths and angst of coming of age. In Reed, we find a narrator seeking meaning in radical politics, and finding more about his family and himself in the search than he knew was possible." —Naomi Jackson, author of The Star Side of Bird Hill

"Ryan Lee Wong’s debut is a poignant reminder of that internal journey we’re all on: of wanting to belong and achieve, whether it’s as an activist, a son or a daughter, or as a member of your chosen community. Reed’s whirlwind journey through Los Angeles and K-Town towards that growth and understanding will also challenge readers to consider how much we can still learn, from the people and places we already think we know best.” —Celeste Pewter
Don't miss news & events from Catapult. Subscribe to the newsletter today.