Davey Davis's first book, the earthquake room, was released by TigerBee Press in 2017. They write a weekly newsletter and mutual aid fundraiser about art, culture, sexuality, and people named David at itsdavid.substack.com. They live in Brooklyn. 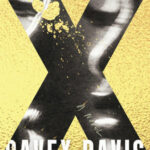 A thrilling portrait of political terror and the violent pleasures found in warehouses, bathrooms, and dungeons across New York City, X is a novel that delves into the psyches of characters on the margins

The world is ending, and down-and-out sadist Lee spends their days working for a big corporation and their nights wandering the streets of Brooklyn listening to true crime podcasts. But everything changes when Lee is dragged to a warehouse party by their best friend, where they find themself in the clutches of the seductive and bloodthirsty X. When Lee seeks her out again, she’s nowhere to be found.

Amid the steady constriction of civil rights and the purging of migrants and refugees, the U.S. government has recently begun encouraging the semi-voluntary “exporting” of undesirable citizens—the radicalized, the dissident, and the ungovernable. Word has it that X may be among those leaving. If Lee doesn’t track her down soon, she may be gone forever.