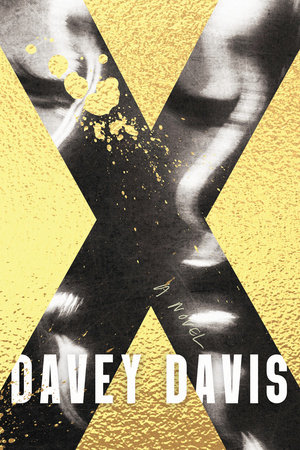 A thrilling portrait of political terror and the violent pleasures found in warehouses, bathrooms, and dungeons across New York City, X is a novel that delves into the psyches of characters on the margins

The world is ending, and down-and-out sadist Lee spends their days working for a big corporation and their nights wandering the streets of Brooklyn listening to true crime podcasts. But everything changes when Lee is dragged to a warehouse party by their best friend, where they find themself in the clutches of the seductive and bloodthirsty X. When Lee seeks her out again, she’s nowhere to be found.

Amid the steady constriction of civil rights and the purging of migrants and refugees, the U.S. government has recently begun encouraging the semi-voluntary “exporting” of undesirable citizens—the radicalized, the dissident, and the ungovernable. Word has it that X may be among those leaving. If Lee doesn’t track her down soon, she may be gone forever.

Davey Davis's first book, the earthquake room, was released by TigerBee Press in 2017. They write a weekly newsletter and mutual aid fundraiser about art, culture, sexuality, and people named David at itsdavid.substack.com. They live in Brooklyn.

“X is lyrical and nonlinear, with sentences that feel like carved obsidian: dark, sharp and shiny . . . the overall effect is masterly, a perfect mating of style and subject . . . X documents a dystopia that has only just arrived, suggesting that perhaps there was a moment when we could have taken a different path . . . [It] will leave you, in the same way it leaves its narrator, wondering: What are you ignoring? What can’t you admit to yourself? And is it already too late, or have you just given up?” —Hugh Ryan, The New York Times Book Review

"Davis is a remarkably self-assured author, and X is a dizzying, beautiful novel, and a fascinating look at a subculture that mainstream American art has frequently shied away from." —Michael Schaub, NPR

"In this dystopian yet all-too-imaginable read, a new friend of Lee’s goes missing around a U.S.-led purge of migrants and refugees, resulting in a tale as sexy as it is alarming—and making it the perfect thing to read at Riis Beach all summer long." —Emma Specter, Vogue

"One of Davey's enormous talents is world-building through tightly wound, imaginative descriptions of characters, moods, and places . . . Delectably provocative, adventurous, urgent, dizzying, mouthwateringly kinky, queer, and not for the faint of heart, Davis has conjured an ashen gray world where the end is near, but sex remains hot and ready on the tongues of the surviving outcasts. But whether in the form of a bloody BDSM release while tied to a St. Andrew's Cross or a sex date at the novel's underground Fist club, hope beckons and snaps right around the corner like the quick of a whip." —Jim Piechota, Bay Area Reporter

"Anytime the jacket copy on a book promises to explore 'warehouses, bathrooms, and dungeons across New York City,' it has our attention. This noir-inflected dystopian thriller follows true-crime obsessive Lee as they move through those spaces and attempt to unravel a mystery involving the titular 'X.' Author Davey Davis has cited Sarah Schulman, Dennis Cooper, and James M. Cain as influences, suggesting X will be a wild ride into the unknown." —Thrillist

"It is a rare thing for a novel to repulse and charm its readers in equal measure, but Davey Davis’ X does so flawlessly. A noir-tinged tale of the S&M dungeons and darkrooms of Brooklyn, Davis’ novel offers us a glimpse at a dystopia that is far too close for comfort." —Barry Pierce, AnOther (UK)

"Where Davis succeeds is in their masterful blending of noir, dystopia, and sadism, as if James M Cain met the Marquis de Sade at a very strange party. Davis employs an unabashedly queer register in their writing and they are so blissfully blasé in their narrative voice that you hope nobody glances at what you are reading on the bus. There is always a catharsis present in transgressive writing. The feeling that you are experiencing such utter degradation that it almost cleanses your soul when it is finished. X feels like a soul cleanser. You’ll put it down and feel like you can breathe more deeply than ever before." —Barry Pierce, The Big Issue (UK)

"An engrossing read that asks big questions about autonomy and freedom in every sense of those words." —Sarah Neilson, A Them Best Book of Summer

"Whether in their debut novel the earthquake room or in their consistently fascinating substack DAVID, Davey Davis is one of the sharpest chroniclers of contemporary queer culture. Their writing goes beyond discourse, excavating the complexities of topics our communities love to simplify. Their new book, X, is a noir based in a present much like our own. It’s as sticky, thought-provoking, and, simply, entertaining, as we’ve come to expect from Davey." —Drew Gregory, Autostraddle

"Thrilling, sexy, and electric . . . It’s the type of book that grabs you by the collar and won’t let you go until you finish. It's queer, dark, and mesmerizing." —Adam Vitcavage, Debutiful

"Davis’ enticing debut is a Winterson-reminiscent tale of love and lust on the margins, a bewitching mix of kink and dystopian thrills." —Michelle Hart, Electric Literature

"Davis delivers an astonishing speculative tale of sex, power, and gender . . . Vivid and witty, Davis’s prose hurtles between moments of beauty and darkness, often in the same breath . . . This one hits hard." —Publishers Weekly (starred review)

"OH OH OH I FINISHED IT AND THREW MYSELF DOWN THE STAIRS" —Leigh Cowart, author of Hurts So Good

“Davis is an astounding writer, seemingly unconstrained by taboos and waist deep down in the maw of life, examining what the rest of us shy away from—never more than here in X, the rare book that can thrill and entertain, while simultaneously causing you to question everything about how you’re living.” —Torrey Peters, author of Detransition, Baby
Don't miss news & events from Catapult. Subscribe to the newsletter today.