Michael Hearst is a composer, multi-instrumentalist, and writer. He is a founding member of the band One Ring Zero, which has released nine albums, including the literary collaboration As Smart As We Are (The Author Project), featuring lyrics by Paul Auster, Margaret Atwood, Dave Eggers, and Neil Gaiman, among others; Planets, a collection of new compositions to represent the solar system and beyond; and their most recent, The Recipe Project, in which the band has taken recipes from today's top chefs (Mario Batali, Tom Colicchio, David Chang, etc.), set them to music, and sing them word for word. 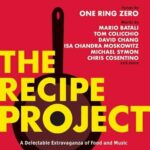 A Delectable Extravaganza of Food and Music

What began as a simple idea: take the recipes of today’s top chefs, set them to music, and sing them word for word. The result is a quirky, remarkably catchy cd-book combo that poses some timely questions about the glories of music and food.

If chefs are the new rock stars, why not celebrate them as exactly that? And how loud can David Chang play The Kinks before his restaurant patrons walk out?

Here, in one totally unnecessary collection, you get it all: the album of songs, the brilliant recipes, plus personal interviews with the famed chefs about everything from childhood violin lessons to teenage Van Halen haircuts. Along the way, some of the most noteworthy culinary writers in the country—including Melissa Clark and John T. Edge—weigh in on how food and music have helped them survive screaming newborns, religious fundamentalism, and dinner with grandma.