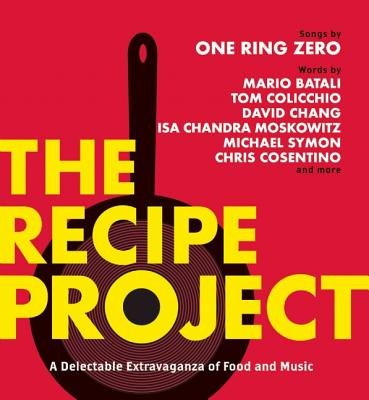 A Delectable Extravaganza of Food and Music

What began as a simple idea: take the recipes of today’s top chefs, set them to music, and sing them word for word. The result is a quirky, remarkably catchy cd-book combo that poses some timely questions about the glories of music and food.

If chefs are the new rock stars, why not celebrate them as exactly that? And how loud can David Chang play The Kinks before his restaurant patrons walk out?

Here, in one totally unnecessary collection, you get it all: the album of songs, the brilliant recipes, plus personal interviews with the famed chefs about everything from childhood violin lessons to teenage Van Halen haircuts. Along the way, some of the most noteworthy culinary writers in the country—including Melissa Clark and John T. Edge—weigh in on how food and music have helped them survive screaming newborns, religious fundamentalism, and dinner with grandma.

Michael Hearst is a composer, multi-instrumentalist, and writer. He is a founding member of the band One Ring Zero, which has released nine albums, including the literary collaboration As Smart As We Are (The Author Project), featuring lyrics by Paul Auster, Margaret Atwood, Dave Eggers, and Neil Gaiman, among others; Planets, a collection of new compositions to represent the solar system and beyond; and their most recent, The Recipe Project, in which the band has taken recipes from today's top chefs (Mario Batali, Tom Colicchio, David Chang, etc.), set them to music, and sing them word for word.

“A delightful and nerdy treat for the foodie-musicologist, transforming delicious recipes into singable, danceable songs, a straight shot to our omnibus of favorite cross-disciplinary cookbooks.” —Maria Popova, The Atlantic

“The food and music worlds are not only colliding but collaborating. The creative minds behind this fusion are the members of the band One Ring Zero. And the end goal of all of this? Make recipes and food more accessible and fun.” —Time

"The book also has plenty of insightful musings from folks like David Chang, Jonathan Dixon and Bon Appetit's own Christine Muhlke, but the hook is with the album. By stylistically channeling the Beastie Boys and Bach to Bowie and Belly (with the latter's Tanya Donelly lending vocals on a track), the band's catchy recipe adaptations make for an engaging listen." —Michael Singer, Bon Appetit

"We found the ideal background music for cooking: Lyrics on the album The Recipe Project from recipes by famous chefs. Food Network stars Aaron Sanchez and Michael Symon, among others, handed over their favorite recipes to the band One Ring Zero so they could turn them into catchy tunes.” —Food Network Magazine

"If you're really interested in exploring the relationship between food and music, I would suggest focusing on the essays and interviews. What I like about the album itself, though, is that it injects some much-needed levity into the topic of chefs and their food—a subject which has become almost delusionally self-serious of late. It's hard to be reverential about a recipe when it's set to accordion music.” —Elizabeth Gunnison, Esquire

“For the project, One Ring Zero, a musical group led by New York multi-instrumentalists Joshua Camp and Michael Hearst, used recipes from platinum chefs like Mario Batali and Tom Colicchio as lyrics. Then they paired the spoken recipes to tunes done in various sonic styles, from banda to metal. The whole thing got served up with a side of informative food essays, making The Recipe Project a true feast for cuisine geeks. It’s a project worthy of the new breed of food pornographers, who have transformed cooking programming into an indulgent pleasure.” —Scott Thill, Wired

“Each chef got to pick their own musical style for their Shrimp Remoulade, Pickled Pumpkin or Tunisian chicken wings, all of which were served at the album’s launch party. In other words, the music is as diverse as the dishes.” —Rachel Wharton, NY1

“The chefs picked their own musical styles, from classic rock (Michael Symon) to Mexican banda (Aaron Sanchez) to rap (Chris Cosentino), creating a hilarious ode to all things musical and culinary. A CD of the songs comes packaged in a book by Black Balloon called The Recipe Project, edited by Oprah.com’s own Leigh Newman, which includes all the recipes (you can actually cook the dishes), plus interviews with the chefs (David Chang dishes on childhood violin lessons), original playlists by chefs, and essays on food and music by every kind and stripe of writer.” —Lynn Andriani, Oprah.com

“Between the covers, you'll find recipes, prose pieces, chef interviews, and yes, music. Pore through the pages and you'll be rewarded with some lovely food writing, delicious food, and toe-tapping tunes. It's a multi-sensory feast.” —Esther Sung, Epicurious

“The CD and accompanying book sets to music recipes by such celebrity chefs as Mario Batali, John Besh and Aarón Sanchez. The recipes are sung complete, from the ingredients to the directions and serving sizes. It's infectious and catchy. So much so, I started singing recipes as I made them at home, like I had been infected with a melody virus.” —Jeff Houck, Tampa Bay Online

“The Recipe Project is one of the year's most ambitious books, combining interviews, essays, and recipes with a music CD to wondrous results. The project's combination of food, writing, and music works on every level.” —Largehearted Boy

“Silly and smart all at once, a good gift for your musical foodie friends.” —The Denver Post

"Need fun stuff for the super-music-nerd-foodie who has everything? Here ya go: Famous chefs’ recipes sung—literally sung, just as written ('1 teaspoon salt, 2 tablespoons extra virgin olive oil,') to original pop music in styles ranging from power pop to acid klezmer (you’ll know it when you hear it), accompanied by a book of smart essays and thoughtful oddities. I’ll admit I’m glad they didn’t record Julia Child’s six-page recipe for cassoulet, which would fill an entire CD—maybe two. But if they ever do, I’m thinking a prog-rock style opus, a la 'In-A-Gadda-Da-Vida.'" —Ted Allen, host of Food Network's Chopped
Don't miss news & events from Catapult. Subscribe to the newsletter today.