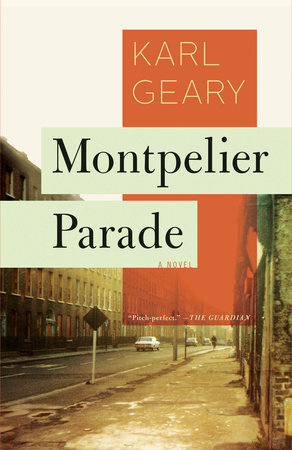 “[An] accomplished debut. . . . The novel is narrated entirely in the second person, a stylistic choice that produces moments of intense intimacy.—The New Yorker

“Geary enters the literary arena with a bang: this debut about an unconventional love affair between a teenage boy and an older woman is unassuming but gorgeously rendered.”—Publishers Weekly,starred and boxed review

Montpelier Parade is just across town, but to Sonny it might as well be a different world. Working with his father in the garden of one of its handsome homes one Saturday, he sees a back door easing open and a beautiful woman coming down the path toward him. This is Vera, the sort of person who seems destined to remain forever out of his reach.

Hoping to cast off his loneliness and a restless sense of not belonging—at high school, in his part–time job at the butcher shop, and in the increasingly suffocating company of his own family—Sonny drifts into dreams of a different kind of life. A series of intoxicating encounters with Vera lead him to feel he has fallen in love for the first time, but why does her past seem as unknowable as her future?

Unfolding over a bright, rain–soaked Dublin spring, Montpelier Parade is a rich, devastating debut novel about desire, grief, ambition, art, and the choices we must make alone.

Karl Geary was born in Dublin, and moved to New York City at age sixteen. He cofounded two East Village institutions: the music venue Sin–é, and later the Scratcher. He has worked as a scriptwriter (Coney Island Baby) and an actor (Michael Almereyda’s Hamlet; Ken Loach’s Jimmy’s Hall), and has adapted and directed Dorothy Parker’s story “You Were Perfectly Fine” for the screen. He lives in Glasgow with his wife and daughter.

“[An] accomplished debut. . . . The novel is narrated entirely in the second person, a stylistic choice that produces moments of intense intimacy”—The New Yorker

“Geary enters the literary arena with a bang: this debut about an unconventional love affair between a teenage boy and an older woman is unassuming but gorgeously rendered”—Publishers Weekly,starred and boxed review

“One of the most quietly devastating Irish novels in recent memory”—Literary Hub, ""Literary Hub's Favorite Books of 2017""

“Luminous and moving. A story that asks who you can love and how, and a novel that gets to the heart of things; it certainly got to the heart of me”—Sunjeev Sahota, Man Booker Prize shortlisted author of The Year of the Runaways

“Few novelist debut with a masterpiece, but Geary has done just that. Stunning”—Daily Mail

“Geary is the latest player in a recent resurgence of Irish literary talent, which also includes Jess Kidd (Himself) and Lisa McInerney (The Glorious Heresies). In Montpelier Parade, he delivers an unforgettable love story in writing that is often exceptional . . . Geary captures time and place startlingly well . . . Montpelier Parade is reminiscent of Barry Hines’ novel A Kestrel for a Knave — that 1960s classic of social realism — in its depiction of a youngster trapped by deprivation. But what is Geary’s, and Geary’s alone, is the desperately moving romantic entanglement at its heart”— Financial Times (UK)

“Geary — who has previously worked as an actor and scriptwriter — is a genuine talent. The sense of intimacy created by the second–person narrative is brilliantly sustained and the dialogue throughout is pitch perfect, seeming almost audibly to slice the always pregnant, often suffocatingly toxic atmosphere”—Daily Mail (UK)

“Geary's acute observations perfectly capture the essence of boyhood bewilderment and bravado . . . This is an unusually vivid novel that presents life how it is, rather than how Hollywood scriptwriters might like it to be”—Press Association (UK)

“A class act, Montpelier Parade is an assured and moving debut from a writer confident in his voice and his unusual approach to storytelling”—Sunday Business Post (UK)

“A bittersweet love story. . . . Geary’s depiction of his home town is so visceral you can almost feel the dreich air seeping into your bones as you read. . . . Geary’s acute observations perfectly capture the essence of boyhood bewilderment and bravado. . . . An unusually vivid novel that present life how it is”—The Herald (UK)

“The work of a deft, fearless writer ... evoking the subtly dark comedy of Patrick McCabe, and the delicious lyricism of Peter Murphy, Geary has a keen recollection of the folly and hunger of youth. Add in a gut–spinning plot twist, and it's safe to describe Montpelier Parade as one of the first significant releases of 2017”—Irish Independent

“A class act...Montpelier Parade is an assured and moving debut from a writer confident in his voice and his unusual approach to storytelling”— Sunday Business Post (Ireland)

“Beautiful and tender ... a wonderful read whose tender story will stay with you long after turning the last page”— RTE (Ireland Public Radio)

“Captivating ... a luminous, moving story that is full of heart”—Image Magazine

“I adored this unconventional love story. It’s tender, with luminous language, and should catapult the author to literary fame”—Irish Examiner