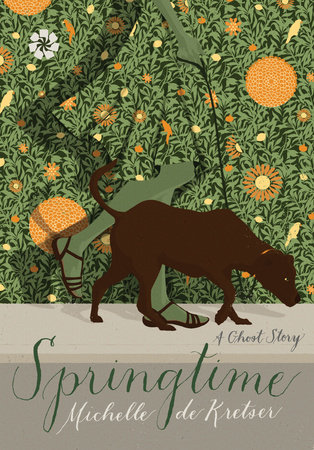 “This is a gorgeous, delicately surprising piece of writing. . . . It’s like spirit photography, all fuzzy outlines and unaccountable light: a snapshot of something that may or may not exist.” —Terrence Rafferty, The New York Times Book Review

When Frances met Charlie at a party in Melbourne, he was married with a young son. Now that the couple has moved to subtropical Sydney, a lusher and more chaotic city, Frances has an unshakable sense that the world has tipped on its axis. Everything seems alien, and exotic—and Frances is haunted by the unknowability of Charlie’s previous life. A young art historian studying the objects in paintings––the material world––Frances takes mind–clearing walks around her neighborhood with her dog. Behind the fence of one garden, she thinks she sees a woman in an old–fashioned gown, but something is not right. It’s as if the garden exists in a vacuum suspended in time, “at an angle to life.”

Springtime is a ghost story that doesn’t conform to the genre’s traditions of dark and stormy nights, graveyards and ruins. It breaks new ground by unfolding in sunny, suburban Australia, and the realism of the characters and events make the story’s ambiguities and eeriness all the more disquieting. The richness of observation here is immediately recognizable as Michelle de Kretser’s, a writer who has been praised by Hilary Mantel as a master of “”the sharp, almost hallucinatory detail.”

"Springtime is a small and beautifully crafted book, all shining, perfectly polished sentences. It's slight enough to finish in one sitting, but restrain yourself: Savor every word of it." —Constance Grady, Vox's "18 New Books to Read this Summer"

"De Kretser, author of four well–received novels, is a writer who other writers admire. Hilary Mantel, no less, has praised de Kretser for her 'sharp, almost hallucinatory detail.'" —Sarah Murdoch, The Toronto Star

“Each bite–sized chapter of this charming book is punctuated by a revelation, whether mundane or otherworldly, that reminds us that we all inhabit not just space, but time. It's a fast and captivating read, leaving us to wonder what we might be missing as we wander through the landscapes of our own lives.” —Ginny Greene, The Minneapolis Star Tribune

"A young scholar is haunted by literal and metaphorical ghosts. . . Frances is adjusting to her new life not only as a Sydney resident, but as the lover of Charlie, who's left his marriage and his young son, Luke, to live with her. To mitigate against her disorientation—particularly when Luke comes to visit—Frances walks her dog through her new neighborhood. When she keeps glimpsing a woman no one else can see, wearing "an old–fashioned dress" and standing in a lushly landscaped backyard, she feels unsettled. . . De Kretser has crafted a story that is somewhere shy of novella, but the brevity suits not only the abruptness of the intrusions in Frances' life, but also de Kretser's knack for focusing on just a few charged details. Indeed, this is a story about perception as much as it is a kind of ghost story. . . A subtle and intellectual take on the supernatural." —Kirkus Reviews

"All the traditional pleasures of a ghost story are revived, and cleverly transformed, in de Kretser's taut, nimble, atmospheric short novel. . . Readers will retain the precise, startling images powering de Kretser's prose—azaleas growing 'as big as fists'—rendering even loved ones as unknowable as the world beyond." —Publishers Weekly

“De Kretser's prose is as lush and evocative as the plantlife surrounding and intoxicating her protagonist.” —Christopher Shultz, LitReactor

“A serious international novelist of the first rank.” —The Economist

"A dark gem of a book . . . .One reads Springtime not for its shock value––this tale is much more subtle than that––but for the way De Kretser explores the nature of ambiguity and for her deliciously unsettling descriptions." —Andrew Wilson, The Independent

“[Springtime is] a wonderful reminder of the good things that can happen when publishers take on shorter works….It's a ghost story, albeit a thrillingly self–aware and lightfooted one….While Springtime is preternaturally alert to its antecedents––despite the bell–like clarity of de Kretser's prose the story suggests something of a thrilling sublimation of Henry James's supernatural fiction––it is also exquisitely modern.” —James Bradley, The Australian
Don't miss news & events from Catapult. Subscribe to the newsletter today.