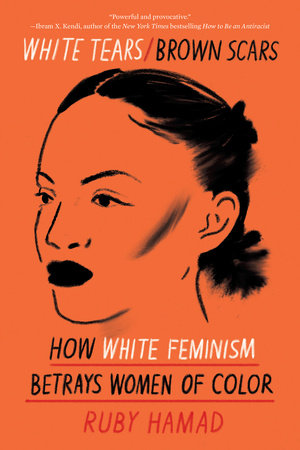 Called “powerful and provocative” by Dr. Ibram X. Kendi, author of the New York Times bestselling How to be an Antiracist, this explosive book of history and cultural criticism reveals how white feminism has been used as a weapon of white supremacy and patriarchy deployed against Black and Indigenous women, and women of color.

Discussing subjects as varied as The Hunger Games, Alexandria Ocasio–Cortez, the viral BBQ Becky video, and 19th century lynchings of Mexicans in the American Southwest, Ruby Hamad undertakes a new investigation of gender and race. She shows how the division between innocent white women and racialized, sexualized women of color was created, and why this division is crucial to confront.

“A stunning and thorough look at White womanhood that should be required reading for anyone who claims to be an intersectional feminist. Hamad’s controlled urgency makes the book an illuminating and poignant read. Hamad is a purveyor of such bold thinking, the only question is, are we ready to listen?” —Rosa Boshier, The Washington Post

RUBY HAMAD is a journalist, author, and academic completing a Ph.D. in media studies at UNSW (Australia). Her Guardian article, ‘How White Women Use Strategic Tears to Silence Women of Color,’ became a global flashpoint for discussions of white feminism and racism and inspired her debut book, White Tears/Brown Scars, which has received critical acclaim in her home country of Australia. Her writing has also featured in Prospect Magazine, The New Arab, and more. She splits her time between Sydney and New York.

The Weekend Edition, A Beginner's Guide to Antiracism Reading Pick

"A stunning and thorough look at White womanhood that should be required reading for anyone who claims to be an intersectional feminist. Hamad’s controlled urgency makes the book an illuminating and poignant read. Hamad is a purveyor of such bold thinking, the only question is, are we ready to listen?"—Rosa Boshier, The Washington Post

"In her debut book, journalist Ruby Hamad explores the connections between white feminism and white supremacy . . . In breaking down examples from history, as well as from her own life as an Arab woman working in Australian media, Hamad offers a haunting but powerful reading of white feminism and its lasting impacts on marginalized communities."—Annabel Gutterman, TIME

"Exactly the kind of book that every ally needs to read right now." —Laura Hanrahan, Cosmopolitan

"Hamad offers a comprehensive look at the ways in which women of color have been dismissed by society . . . This book should be considered required reading." —Lauren LeBlanc, The Observer

"It’s eye–opening and necessary reading for anyone, but especially white women who consider themselves feminists." —BuzzFeed

"[A] provocative exploration of the ways—both historic and current—that white women have been dangerous agents of white supremacy . . . Hamad is a rigorous historical reporter and a powerful storyteller, and her work in White Tears/Brown Scars will leave readers appropriately unsettled, enraged, and urged to take action against the Amy Coopers of the world." —Kristin Iversen, Refinery29

"In this endlessly readable debut, Ruby Hamad expertly illustrates the multitude of historical and contemporary ways in which white feminism has been used as a tool of white supremacy. White feminists: READ THIS BOOK." —Karla Strand, Ms. Magazine

”With scholarly but highly engaging prose, Hamad details white women’s roles in oppression across continents, a much–needed history lesson for those inclined to reduce racism to individual behavior . . . For readers truly interested in dismantling white supremacy, this is a must–read. An extraordinary book for anyone who wishes to pay more than lip service to truly inclusive, intersectional feminism." —Kirkus Reviews (starred review)

"White Tears/Brown Scars belongs in twenty–first–century feminist canon. It's grounded in deep historical context, yet thoroughly of the present. It makes bold intellectual arguments, but is extremely readable and grounded in human experience. If you are a white woman, it may make for uncomfortable reading: this book takes the most precise scalpel to the way that white women leverage race and gender of any book that I've read. If you are a woman of color, perhaps it will make you feel seen. If you are a man, read it for your own education! Hamad has written a truly exceptional, agenda–setting work."—Rachel Hills, author of The Sex Myth

“An essential guide for those who want to be truly intersectional in their feminism. Ruby Hamad skillfully distills history, academic research, and lived experiences of women of color to create an engaging inquiry into white supremacy and the role of white women within it."—Zeba Talkhani, author of My Past Is a Foreign Country
Don't miss news & events from Catapult. Subscribe to the newsletter today.